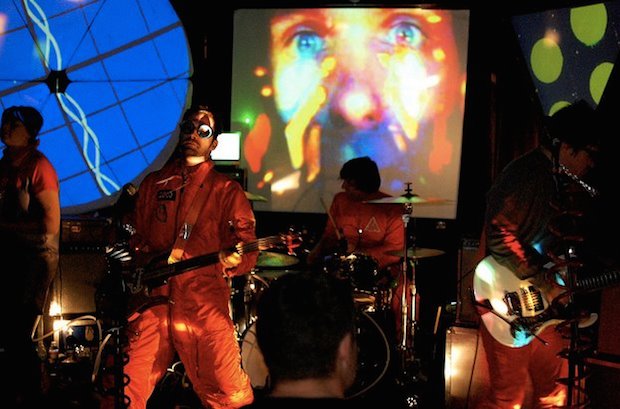 There is a fairly clear line splitting the people who have and have not been to space, but after seeing Man or Astro-Man at Exit/In, I’m not too sure what side of that line anyone attending the show falls on anymore. With few vocals, the space rockers have a sound that not only makes people rock out, but also makes us believe that we are on the moon. Keep on reading for our thoughts on this very interesting show.

Stating off the night at 9pm, in typical late-slot Exit/In fashion, were Alabama natives Wray. Though he crowd was still relatively small at this point, the attendees that were there seemed to truly be enjoying Wray. To be honest, there are very few supporting artists that I’ve ever seen with quite as much of a light show as they had, especially coming from the first opener. The most unfortunate part was that the vocals were very tough to hear, despite the fact that I was right in the middle. Even with this, Wray proved to have quite a bit of potential, and it is exciting to catch them at this stage of their career.

Next up was the slightly angsty but very rocking artist Sallie Ford. While her music style may not have made complete sense with the rest of the bill, Sallie and her band sounded absolutely great. It was rather unfortunate that most of the crowd did not come in until well after halfway through their set, but it really seemed like most people were having a good time listening. Their performance was much more modest and was an obvious showcase for the music; the band employed minimal lighting and didn’t move around the stage much, but it worked for them. This is one of the few times that I was actually rather upset by the shortness of an opening act, because I was thoroughly engrossed in what I was hearing.

It was obvious though, that the two opening artists were completely different than what we were in for once Man Or Astro-Man came on stage. The first thing that stood out was just how loud of a show they put on, but how good it actually sounded, even at Exit/In’s sound level. You could hear everyone on their respective instruments, and, on the rare occasion where there were vocals, they were crisp and clear. The feeling you get when listening and watching is like few other bands; Man Or Astro-Man make you feel like you’re supposed to be listening from somewhere in space. The guitars, bass, and synth all worked together in perfect harmony, while the drums just kept up momentum. At this point in the show, there was a far larger crowd there, and I could definitely see why; it’s not surprise that band who have been around in various forms for roughly 20 years have worked up quite a following. If you’re ever looking for a fun night and Man or Astro-Man is somewhere near you, go check them out. They’re a group that spans many, many genres, so a lot of people can get into their live sound and just have a great time at a very fun show.