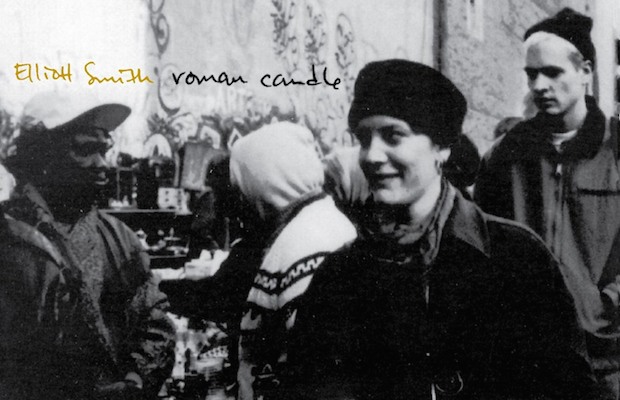 It’s hard to believe that two decades have gone by since the release of what would go on to become the prototype for self-producing indie artists everywhere. Believe it, friends because you can now reminiscence your mid-week-work-day slump away with this Hump Day Diversion featuring Elliott Smith‘s seminal work. We bring the videos, you bring the tissues.

For those of us old enough to remember Elliott Smith as more than just choice ambiance for some of Wes Anderson‘s most emotional moments (such as this), this week marks the 20th anniversary of the release of Roman Candle, Smith’s self-recorded, accidental masterpiece. Truly deserving of the term “lo-fi” recording, what Smith was able to capture sounded at once terrible and terribly good.

The legend goes that the mics were from a neighborhood Radio Shack and among the instruments used was one of these bad boys, a “Le Domino” toy. Many mistakenly recall that the recording occurred at Smith’s place, but it was really in the basement of the home of his sometimes manager/sometimes girlfriend JJ Gonson that the magic happened.

Roman Candle consists of just four unnamed songs captured on a four-track in a moment of sheer creative possibility. Unpolished echoes of everyone from Elvis Costello to Simon and Garfunkel hint at Smith’s genius that would blossom and ultimately fade too far before his time.

Originally composed as a demo pitch to land a 7-inch deal, it was never intended for wide release but made its way to the public in July of 1994 via Cavity Search Records due in part to Gonson’s advocacy for the recording. Larry Crane remastered the record in 2010 to clean up some of the harsher moments of poor recording quality via Kill Rock Stars but preserved Smith’s original mixes.

You can celebrate the 20th anniversary of Roman Candle with all four tracks below and purchase the record via Kill Rock Stars (here!).