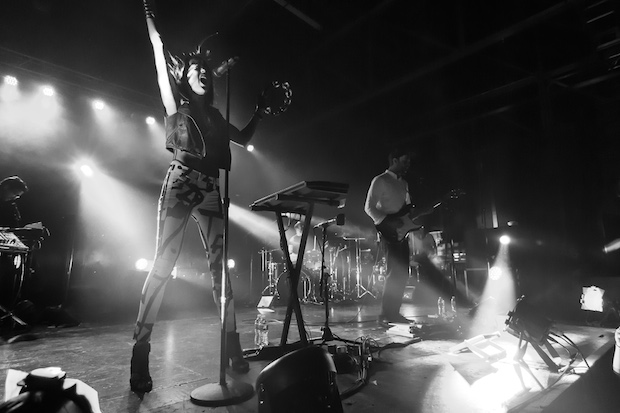 During the summer festival season, Nashville enjoys the spoils of the surrounding events. Our convenient location makes it easy for touring acts to stop through on the way to Bonnaroo, Fun Fun Fun Fest or Forecastle. I’m sure our city’s founding fathers foresaw this. Festival regulars Phantogram and Bad Things brought their slickly produced show to Marathon Music Works on Wednesday, July 2nd. Read on for our review, along with some sweet photos by Brian Hill.

Much has been made about Olympian Shaun White’s band, Bad Things. But what stands out to us was the sheer ferociousness of the entire unit. Drummer/vocalist Lena Zawaideh was an absolute beast, hammering away strong beats while adding to the band’s four-part vocal harmonies. Singer Davis LeDuke switched up full-force yells with blended harmonies while bassist (and former Augustana member) Jared Palomar stomped a hole in the stage. Wrap that all up with guitarists Anthony Sanudo and Shaun White, who alternated between anchoring the band and pushing the whole operation to the limit.

A surprising amount of the crowd seemed to be there for Bad Things: as high as 25% by our guess. Speaking of the crowd, the people there were fairly diverse. Flower-adorned ladies meshed with Wiccan girls, while slick-haired bearded types bobbed their heads alongside weirdo music nerds like us.

By the time we properly cooled off from Bad Things’ set, we expected a relative chill-out with Phantogram’s cinematic catalog. Wrong. The duo, Sarah Barthel and Josh Carter, was joined by a touring band. The crew crashed the stage to nearly a dozen hyperactive strobe lights that flickered and flared much of the night. Barthel reminded us of a metal frontman, with her black hair lashing out amid headbanging. It was an interesting contrast to the sound, which was noticeably polished, approaching studio levels. Big shout out to Marathon’s sound people; it’s so easy for the bass to erode vocals in warehouse environments.You can also get more information to know how to avail warehouses for rent.

All in all, it was a night of surprisingly physical and intense performances for acts known for their lush and produced sounds. If you missed it, check out the photos below to recapture some of the magic.