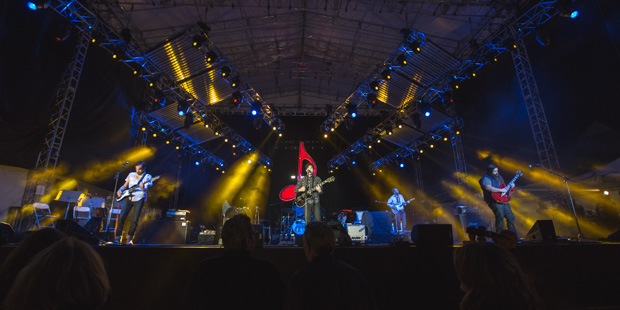 Summer is in full swing, and that means that Nashville’s music scene seems to thrive on the heated, humid air. One of the musical events of particular note this summer is the concert series Nashville Dancin’. Occurring each Thursday night, the free show takes local, national, and international acts, and brings them to the stage of Riverfront Park right off Broadway. We’ve been providing you with extensive coverage of the series so far, and we’re not quite ready to break that trend. With that in mind, we’d like to offer the following review (with photos by the inestimable Shawn Jackson) of last week’s rendition of the series, featuring local acts The Apache Relay, Steelism, Promised Land Sound, and ELEL. We had a lot of fun this week, and thought it only appropriate to bring you a full review, so, without further ado, here’s Week 4 of Nashville Dancin’.

If you’ve been to previous weeks of Nashville Dancin’ or really any show down in Riverfront, you’re no doubt familiar the layout of the venue. After all, the medium sized stage and the terraced lawn at Riverfront are quite distinctive. Imagine our surprise, then, to arrive this week only to find that Nashville Dancin’ had been lumped into the 4th of July celebrations downtown. The stage had been moved up to the end of Broadway and seemed to have tripled in size since the last week. Seeing as this exact setup would be used for the following night’s Independence Day festivities, it shouldn’t have been too surprising that the stage setup was altered, but it didn’t seem as if anyone, even the bands, was expecting a setup of that size. This would be enough to shake the confidence of any band, especially the first act of the evening, but the confidence of local indie rock outfit ELEL was not fazed. The group played with their trademark vigor, dominating the stage with their constant movement and approachable demeanor. This same stage presence is what allowed this group to recently perform at Bonnaroo, so we should have saw it coming, but one really needs to see this band play live to fully understand the project. Fans of the act were no doubt pleased to hear ELEL play both a number of their more familiar hits and a some new tunes; all in all, the group played organically, tightly and managed to look good doing it.

Following ELEL was another local act: Promised Land Sound. The group claim to play with the style and vigor of Chuck Berry and similar early rock and roll artists, and, while the substantiation behind this claim will be left up to the readers, we thought the assumption of such an attitude was an interesting direction for a country-rock band to take. By playing a modern take on classic musical ideas, Promised Land Sound had the potential to appeal to a wide range of music fans, and indeed their set seemed well liked by the vast majority of the crowd. Of particular note was the classic counter melodic structure of the vocal and guitar lines; more often than not, when one of these two parts played an interesting phrase or harmony, the other would swoop in and further emphasize the same idea. This maneuver is not only indicative of the band’s talent, it also highlights the healthy communication going on between the band members. This communication is, without a doubt, one of the most necessary yet difficult-to-achieve aspects of being in a successful act, and, while Promised Land Sound seem to still be in the upswing of their career, if their performance at Nashville Dancin’ can be used to predict the future, they still have a number of fantastic shows ahead of them.

While we’ve seen the evening’s next act, Steelism, multiple times before, it’s always a treat to get to see this instrumental blues band, and we were quite excited for their set to begin. While the music isn’t too experimental or even nontraditional, it grooves quite well and is filled with fantastic solos, and really what else does one need for a good live show? The tradeoff between the two frontmen, one on the Telecaster guitar and the other on a pedal steel, was just as entertaining as Promised Land Sound’s guitar-vocal combo, but lent a different effect to the music of Steelism. The duo played a number of the hits off their debut EP, as well as a slew of covers, including the James Bond theme song. It would be safe to say that this engaging act was a crowd pleaser; as the natural light began to find and the stage lights came into prominence, the crowd swelled in size, which served only to increase the excitement of the band. All of the Steelism show’s we’ve seen before have been fantastic, but located a smaller venue or club around town. Watching them face the new challenge of filling a massive stage, outdoors, on the day before the 4th of July was interesting, but the band more than rose to the occasional. It only goes to prove why Steelism is one of Nashville’s hotest blues acts.

Despite their utter dominance of the stage, Steelism were not the evening’s headliner: local indie roots rock act The Apache Relay were. Fresh off the strength of their new album, the group has recently gained newfound buzz that few acts have experienced, especially so early in their career. However, the hype surrounding The Apache Relay is not unfounded; they definitely have the guts and talent to pull off a sophisticated yet edgy rock show. By the time the group took the stage, the crowd had grown exponentially, and the natural light had faded enough to allow the stage lights to shine in their full glory. This totally shook up the atmosphere of the venue and really prompted the crowd to pay attention to what was happening up on stage. While the band no doubt sensed this increased awareness, it seemed only to heighten their adrenaline and allow them to play a sharper, tighter set that anyone could have expected. It’s pretty obvious why this group was chosen as the headliner; their high energy set was the perfect way to end the evening and a fantastic way to kick off the Independence Day celebrations. America!