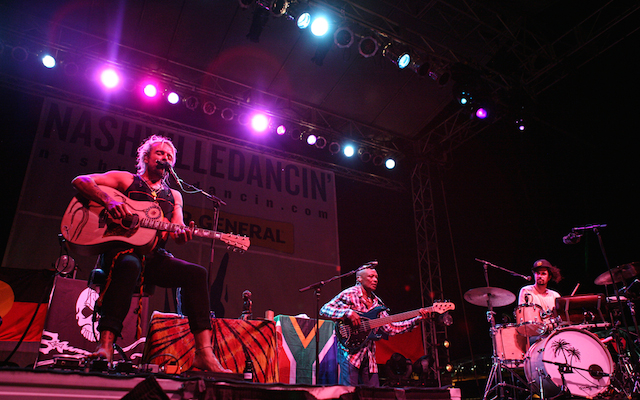 Last Thursday, we had the pleasure of attending the second weekly installment of the aptly named free concert series, Nashville Dancin’. Occurring every Thursday night throughout June and July in Riverfront Park, Nashville Dancin’ celebrates the positive vibes of summer and dance. We had a fantastic time during the first week of the festival (you can check out our rundown here), so we decided to come out last Thursday, June 19 to check out Australian songwriter maestros Xavier Rudd and Ash Grunwald, Chicago based-funk act The Main Squeeze, and local country artists Ray Scott. Those are some pretty admirable acts to get to see for free, and we definitely took advantage of the night by getting our groove on and downing a few Goose Island 312s. We also brought along photographer Michael Brooks, who spent the evening getting impressively intimate shots of all the acts. We’ve got the rundown on all the bands as well as Michael’s photos after the jump, and trust us, these are all musicians you should familiarize yourself.  So go on, click that “Continue Reading” button. You know you want to.

Okay, okay. Enough shameless attempts to get you readers engaged. Let’s get to the meat of the review. After dealing with the usual fiasco of parking downtown and a hectic walk down Broadway, we arrived at the venue ready to get our groove on and have a great time. Seemingly within seconds of our arrival, Australian blues sensation Ash Grunwald began his set. The dreadlocked performer thrives in the kind of sunny, upbeat music that would accompany a surf trip or day party, so the fact that his set began smack dab in the middle of the afternoon felt quite appropriate. Like any good blues guitarist, Grunwald is quite proficient with a slide, which is quite a familiar sound here in Nashville. However, Grunwald’s blend of blues is entirely different than what you might find in a small club here in Nashville; his Australian roots and attitude are very transparent in his tunes, and it was easy to tell that the audience immediately picked up on the fact that this wasn’t just any blues musician. Instead, it was a unique opportunity for the general public of Nashville to become exposed to an act that is both comfortingly familiar and entirely novel. Seeing as this show was free, a large portion of the audience went into Grunwald’s set with little to no idea who the man was. Any musician will tell you that performing before an unfamiliar crowd is a challenge like no other, but Grunwald rose to the occasion like the professional he is, and likely left with a number of new fans.

The evening continued with local country songwriter Ray Scott. Country music is typically out of the scope of this blog (just look at the name), and yet if there were any country artist we’d want to cover, it would probably be Ray Scott. The player approaches country with a very different take than many of his contemporaries; nearly all of his songs are about having a good time and living a rock and roll country lifestyle. Furthermore, his deep baritone voice is reminiscent of earlier Johnny Cash or even Leonard Cohen. However, Scott’s voice isn’t the only part of his performance that paid a semblance to classic artists; his on-stage persona was engaging and humorous in a way few performers nowadays are. It’s clear that although music is a critical component to Ray Scott’s life, he refuses to take himself too seriously. This attitude is infectious, leading the audience to enjoy the set just as much as Scott did. In addition, the man isn’t afraid to tell short personal stories on stage, which was actually a lot more interesting than it sounds like it would be. Hats off to Ray Scott for performing a fantastic set that impressed even the least country of Nashville music blogs.

If you haven’t been to a show at Riverfront before, the venue is pretty fantastic. There’s a good deal of space, but not so much that the venue feels empty, and the meandering Cumberland River provides an ideal backdrop for the bands. However, the terraced lawn in front of the stage lends itself to sitting down, and indeed at the beginning of The Main Squeeze’s set, the vast majority of the crowd had taken a seat. Within the first 30 seconds of being on stage, the Chicago-by-Bloomington funk act asserted that they were, without a doubt, a “standing up kind of band.” That was perhaps the truest statement were heard all evening. Besides the impressive synth and guitar soloing and phenomenal vocal work, The Main Squeeze really make a name for themselves with some incredibly tight grooves. These are virtually impossible not to dance to; it’s the kind of music that lends itself to moving with the beat. To be honest, we’ve been familiar with these guys for awhile now, but it’s been awhile since we had a chance to see them live. Luckily, their performance at Nashville Dancin’ only served to confirm our beliefs that The Main Squeeze are one of the hottest funk acts on the circuit. If you didn’t get a chance to see these guys live last Thursday, we definitely recommend checking out their tour schedule and catching a performance as soon as possible. Trust us: these guys are talented. You’ll enjoy yourself. Oh yeah, and the band was totally correct: they were a standing up band. By the end of their set, the front pit was filled to the brim with citizens of all walks of life, brought together by a mutual admiration for the funk.

Following The Main Squeeze was the headliner and final performer of the evening, festival favorite Xavier Rudd. Seeing as Rudd is currently touring America with Ash Grunwald, it makes sense that their sets had some sonic similarities, but Rudd seemed to delve further into the realm of psychedelia than Grunwald. If you haven’t seen Xavier Rudd play before, it’s quite a spectacle. Backed by a bassist and drummer, Rudd plays about 15 different instruments throughout his set, including a variety of didgeridoos and Aboriginal instruments. The overall effect of this is a very relaxing, organic sound matched by few other musicians today. It’s immediately obvious when watching Xavier Rudd perform that the man is one of those lucky people that were born with a second helping of musical talent; the barefooted performer exudes comfort and cheerful vibes on stage, and the crowd definitely picked up and amplified that positivity. It was a beautiful set, frankly, and helped to affirm why Xavier Rudd enjoys a reputation as one of Australia’s finest musical exports. Take a look at some of the photos Michael took, as that alone is enough to display the peace and happiness Rudd so devoutly displays to his audience. If the rest of the Nashville Dancin’ sets are strong as this one (and they will be), it’s going to be one heck of a summer. Next week will see Will Hoge, Drake White and the Big Fire, Claire Dunn, and Brian Collins take the stage; without a doubt we’ll be there, and we’d love to mingle with you readers. See you there!

Spoon Drops New Single "The Rent I Pay", See Them At Forecastle