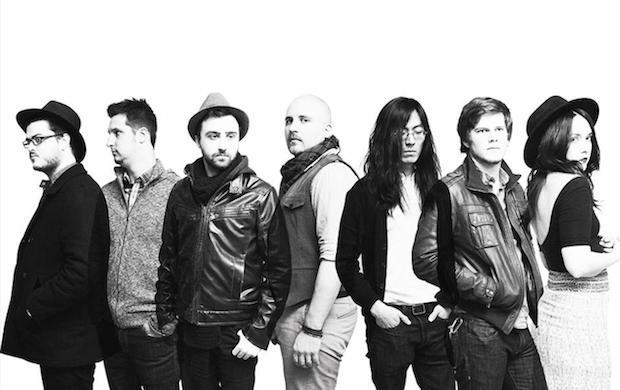 When we first introduced you to Afterlife Parade, it was as a brief mention in our announcement about the Poverty Is Real benefit show at Exit/In. A year and a half after the charitable event, Afterlife Parade is making headlines on No Country’s website again, this time in an announcement about a show they’re playing tonight at The 5 Spot. If you’re 21+, you should head over to the venue around 9pm to grab yourself a drink and hear this eclectic group of singer/songwriters perform together as the creative tidal wave that is Afterlife Parade. (Did we mention the show is free?)

If we could list the members for you, we would, but the list is so long and so constantly changing that most likely by the time we wrote them all down it would be switched up again (according to their Facebook page, there are at least 9 members). Don’t worry – Afterlife Parade is supposed to have a – well, parade of musicians involved. The band’s first album, Death & Rebirth, was well received by audiences, and ever since then the group has focused on building their touring resume. They particularly believe in getting to know their fans on a personal level, choosing to play in houses or small coffee shops. Most recently, the talented songwriters released a single titled “Conquer It All.” So come on down to The 5 Spot, grab a beer, and meet the members of Afterlife Parade. Become their pal. Maybe someday, you’ll see them playing in an arena and you can say, “Yeah, I met them. We’re friends.”

The polar opposite of the infinite membership of Afterlife Parade is the singer/songwriter Jeremiah Stricklin, also known as Oh, Jeremiah. The solo artist hails from Mississippi and deliberately attempts to dodge the typical labeling of genres. He’s been on tour for the last few months and is now joining Afterlife Parade at The 5 Spot for a fun night of drinks, music, and friendship.