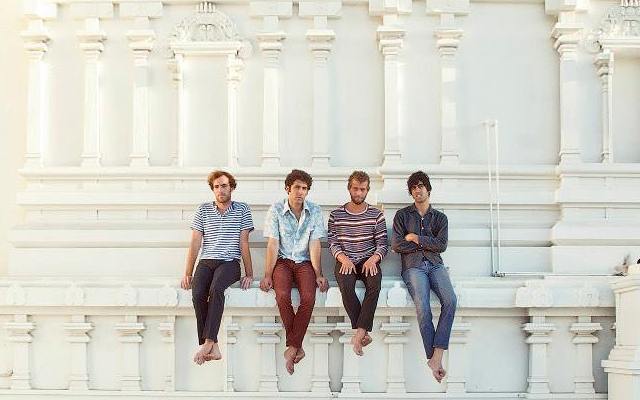 The High Watt, despite being a sub-venue of Mercy Lounge, has a relaxed, intimate vibe that allows fans to become immersed in the music. Tonight, they are hosting Allah-Las, Music Band, and Evan P. Donohue. Allah-Las isn’t a new name to us; we first introduced the group as our Bonnaroo Band of the Day, and they were again brought up in a post from last month announcing tonight’s show. As promised, we now have the details of the lineup for you. It’s going to be a night worth witnessing. It’s $10 for anyone 18+, so check out the lineup and buy your ticket before you miss out.

The word ‘groovy’ went out of common use back in the 1970’s, but if there’s any band to bring that word back into popular demand, it’s Allah-Las. Originally from Los Angeles, this alternative rock/indie group has traveled to Nashville to bring ‘groovy’ back to music. The quartet boasts a distinct style that calls to mind a time when war protests were as common as Wal-Marts, peace signs were prominently displayed, and phrases like “flower child” weren’t all that out there. Despite taking a prominent step back into the 1960’s/70’s with their music, Allah-Las also has an edge to their music that is unmistakably modern. As if to emphasize their influences, the band’s most recent self-titled album is available on vinyl in addition to digital format.

The irony of Music Band‘s name is that when you read it, you think they’re not being creative or unique – and yet there seems to be no other band in the world named ‘Music Band.’ So they are, in fact, as unique as it can get. The group is made up of Lee, Harry and Duncan. Originally formed in New York, the trio now calls Nashville home, and have been making quite a name for themselves in the past year. Here’s a track from the rockers’ most recent album, Live at Wembley:

Amidst the other bands playing tonight, Evan P. Donohue will take the stage as a solo artist determined to bring a big band presence. He’s got quite a resume: Donohue co-founded the Nashville based punk rock band Diarhhea Planet, and he first caught our eye during the Road to Bonnaroo competition of 2012. With influences like Beck and Elvis Costello, Evan P. Donohue will be sure to bring a noteworthy performance to The High Watt’s stage.

Allah-Las, Music Band, and Evan P. Donohue will perform on Wednesday June 11 at The High Watt. The show is 18+, begins at at 8PM (doors at 7PM), and tickets are available for $10.