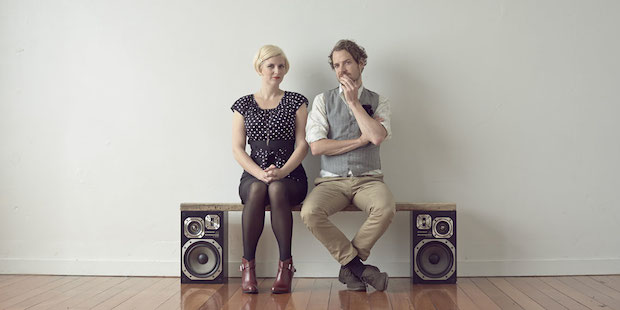 Tattletale Saints is a New Zealand duo who recently relocated to Nashville. They are Cy Winstanley (vocalist, guitarist, songwriter) and Vanessa McGowan (vocalist, double bassist), who were originally part of London-based Her Make Believe Band. They recorded their debut Tattletale Saints album How Red Is the Blood in Nashville in 2013 with Grammy winning producer and multi-instrumentalist Tim O’Brien. The album won New Zealand Music’s 2014 Award for Folk Album of the Year, but don’t let that scare you. A recent review said “Tattletale Saints makes music that lures you in with its familiarity, but stabs deep as a knife. It’s the perfect example of the folk music of a new generation: bitter and furious at the state of the world, but unable to let go of its love for the roots of American music and the hopefulness of true folk songs”.

Tattletale Saints played Scenic City Roots in Chattanooga last week to great reviews, and you can catch them doing their first show with electric guitar and drums at this week’s $2 Tuesday at The 5 Spot in East Nashville. After that, they will be doing a mini-tour of Carolina with a 10 String Symphony. Get to know the Tattletale Saints below, and head out to see them tonight at The 5 Spot.