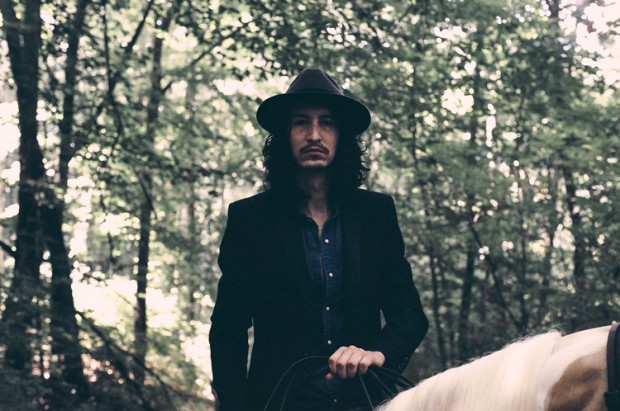 There’s always a story in the way a man stoically rides a horse and stares at those below him. Well, we can’t think of many times where that’s happened to us in real life, except maybe when we are slightly too intoxicated on Broadway. But with one look at Jacob Thomas Jr., you’ll know he won’t feed you any bullshit. Take one listen, and Thomas will back that up. Starting tonight, he’s pulling out all the stops with a four-week residency at The 5 Spot.

Find out what makes Jacob Thomas Jr. and his music so real below.

With his debut album, Original Sin, Thomas clears the way for storytelling with only his voice and acoustic guitar. No hiding lyrics behind an echo chamber of reverb or under the weight of a marching band brass section. That way, you don’t miss lines like the ones in “Bored With You”: “All I wanted was just someone to waste my time/Just another problem that needs solving/You were OK for a while”

Harsh, right? Thomas explains the song is about “people [who] can’t stand the idea of being boring, they have to feel ‘special’ or ‘different,’ and to those people ‘boring’ is the greatest insult.”

In the spirit of Jacob Thomas Jr., we’re going to be honest, too. In Nashville, acoustic guitar wielding singer-songwriters have a hard time standing out. From what we’ve heard of his upcoming full length, Jacob Thomas Jr. doesn’t use a particularly unique set of instruments, but what impresses us is how he uses his prodding voice to dig genuine emotion out of us. It comes down to an intangible feeling, which is what makes us listen in the first place.