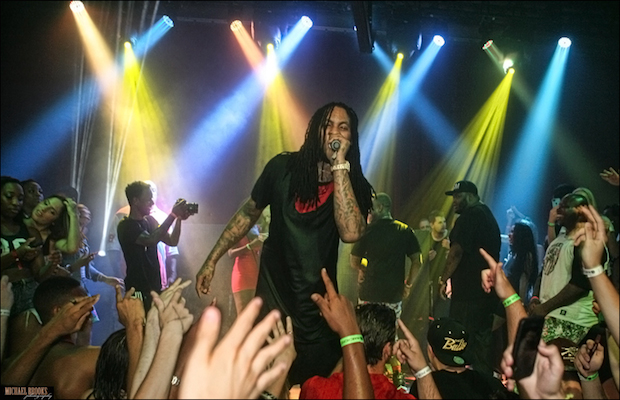 Last Friday (May 30), a few of us at No Country were invited out to experience a VIP evening at Anthem, and we had an absolute blast. You see, this wasn’t just any Friday night at the club; oh no, Atlanta based rapper Waka Flocka Flame was in the house, ready to tear up the mic after opening DJs Mayhem and White Noise spun a number of tracks. While this already sounds like a formula for success in our book, there was another key element that helped distinguish this evening from the rest: it was Waka Flocka Flame’s 28th birthday. Clearly, all the pieces were in place for the evening to transform into a full out party, and we’re happy to report that it did. We’ve got a more in depth review of the show and some pretty fantastic photographs taken by Michael Brooks, so be sure to click through the jump and get the full scoop on this bumping evening.

The evening started out with regular Anthem performer Grant Willis aka White Noise. Originally from Alabama, the young DJ has made a name for himself opening for a number of celebrated electronic acts, including Big Gigantic and Wick-It the Instigator. Although his set started early for a club act (1o pm), the VIP bar upstairs and the dance floor were already filling with people. While we’re sure that White Noise would have wanted more people to be there for his set, those that had showed up already were ready to party, and the modern rap and trap hits that he spun definitely received a very positive reception from the crowd. Plus, we got a chance to check out a venue that we don’t get to visit as often as we’d like while it was still only slightly packed. Suffice it to say, there’s a reason that Anthem has established itself as Nashville’s premier nightclub. Between the recessed booths, upstairs VIP bar, and tastefully installed LED underlighting, Anthem definitely feels like the sort of club Nashville’s elite might frequent. It’s not the biggest club in the world, especially when compared to venues in more club-friendly cities like Miami or New York, but the smaller size is actually more fitting for the emerging club scene in Nashville and helps to make the venue feel full and active throughout the evening.

We apologize for going off on a tangent about the venue, but we wanted to stress to you readers that this is a pretty classy, cool place that we recommend you try to make it out to. You might catch an awesome act, much like the first performer we saw Friday, White Noise (how’s that for transitioning back on topic). Perhaps the most admirable aspect of White Noise’s set is the prevision with which he performed the exact function he was called in to do. It can be difficult to perform at a nightclub early in the evening, but this added difficulty didn’t really seem to phase White Noise in the slightest. Instead, he pumped out a combination of classic rap, modern trap tunes, and electronic influences that was consistently high energy and easily danceable. One could tell that his set was directly responsible for pumping up the audience; he then masterfully took this excitement and directed it towards the second DJ of the evening, Mayhem, and the headliner Waka Flocka Flame. It’s impressive to see a DJ that understands the club scene as well as White Noise; he understood that as the first opener, his entire job was to set an upbeat atmosphere for the evening and get people excited about the upcoming acts. It would be safe to say that White Noise executed both of these tasks perfectly, in addition to spinning a dynamic, musical set.

One of the nice things about seeing a show in a club is the lack of set breaks. Unlike a rock show, one DJ can basically pick up where the last DJ left off. This prevents the audience from getting a break, which in turn keeps the mood of the evening as upbeat and dance heavy as possible. Utilizing this exact tactic, DJ Mayhem began his set all of 30 seconds after White Noise left the stage. Like Waka Flocka Flame, Mayhem is from Atlanta, his set definitely began to work in Atlanta based rap influences. Most impressive, however, was Mayhem’s commitment towards always delivering something new for his audience. Sometimes, after a few hours of hearing DJs spin tracks, they all start to blend together and sound the same. This was not the case for Mayhem; by utilizing a number of different tracks and samples, he managed to maintain a fresh and engaging sound throughout his set. We also found admirable the connection between Mayhem and the crowd. While most DJs see themselves as the center of the show, Mayhem really seemed to comprehend that the real reason a lot of people come out to Anthem is to dance, regardless of who the DJ is. By engaging the audience and encouraging people to get out to the dance floor and start moving, Mayhem was able to take the considerable energy level White Noise set up and boost it even further. All in all, by the time Waka Flocka Flame and his crew took the stage, the crowd was totally amped and ready to go. This was in large part due to Mayhem’s fantastic stage presence and the experience the Atlanta based DJ brought to his set.

By the time Waka Flocka Flame came out and performed, Anthem was filled to the brim. As an ambassador for trap music everywhere, we definitely expected Waka to draw a crowd, but we were surprised at how many Nashvillians showed up. The packed house definitely served to amp up Waka, who seemed authentically excited and grateful to be performing to such a full house. In fact, part of the reason that Waka has made a name for himself in the rap game is the level of appreciation he gives to his fans and concert-goers. By his own admission, Waka views his fans as an extension of Brick Squad Monopoly and his group of close friends, and one could feel this was a truthful statement in his live show. In addition to allowing random women to come dance on stage with himself and his BSM crew, Waka also vacated the stage in favor of dancing with a particularly rowdy group of friends on the dance floor. It was clear that not only does Waka Flocka want to promote positive relationships with his fans, but that dancing and partying with them is genuinely fulfilling for Waka. In a world with detached celebrities that grow annoyed with their fans on a regular basis, Waka Flocka’s fun loving attitude definitely helps him to stand out.

Musically, Waka’s flows were tight and on point. Waka’s trap style beats work perfectly in a club style setting, and the thumping bass and heavily compressed snare sound filled out the hall quite nicely. The mix was also well done; it’s easy to allow the lower end of the frequency spectrum to dominate rap shows, but throughout Waka’s set there was a fair balance between the lows, mids, and highs. This added quite a bit to his set, and really allowed the musicality behind the music to shine. While most of the tracks he performed were from the original Flockavelli and his other mix tapes, there were a few tracks that will undoubtedly show up on Flockavelli 2 next October. All in all, it was a fantastic evening, and we’d like to give a shoutout to Anthem and MarchOne music for putting the evening together. Also, we’d like to wish Waka Flocka a very happy birthday!

We’ve got photos of the set as well as general shots of the venue below; these shots were taken by Michael Brooks and really capture the energy of the evening. Check ’em out!