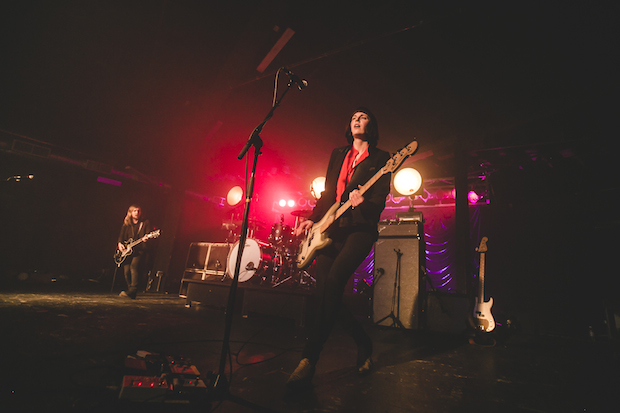 Band Of Skulls and SACCO.
The Cannery Ballrooom, Nashville, TN
May 6th, 2014

When it comes to sound quality, in a place called Music City, we’ve learned that EVERYONE has an opinion. Whether it’s the finer points of production on a record, the instrument levels at live shows dictated by a sound man, or the acoustics of a room, almost everyone has two cents to throw in. With this in mind, we’ve heard the occasional gripe about the sound at The Cannery Ballroom, but when caught Band of Skulls with SACCO there earlier this month things sounded pretty fucking amazing to us!

If you read on after the jump you’ll find epic photos from contributing photographer Jake Giles Netter and more details about how BOS melted our skulls. If you were there, you already know, but, for those that missed it, do yourself a favor and get caught up.

Parking was a nightmare. With three shows filling nearly all their venues, the building that is Cannery Ballroom/Mercy Lounge/The High Watt was lit up like Times Square. We circled the block for a third time trying to find a free place to park, because paying (even $5) is just stupid. After yet another pass, we found something and squeezed in.

Turns out we were the stupid ones because by the time we got into the venue, we’d missed all but three songs of SACCO’s set. A bummer for sure but I’m glad we got to hear some instead of none. We were grooving to their neo-surf rock and soul melodies instantly. The crowd had already began to fill in, but wasn’t shoulder to shoulder. Everyone seemed to beam with approval as they jammed it out for the last song of their set. The sound seemed pretty damn close to perfect to us.

We grabbed beers/whiskey and talked shop for a bit. Before too long, we began to get in to position for headliners Band of Skulls. The venue was more full than before but everyone was standing staggered, with enough space to move around a bit with out bumping into one another. Nearly the perfect number of people, enough that the bands can make some coin and we can all enjoy some tunes without stepping on one another.

The South Hampton, England trio didn’t keep us waiting long. They came out, grabbed their instruments, said hello to the crowd and got down to business immediately. Fast and heavy from the start and they never really let up. Aggressive drumming and blues tinged hard rock licks. If we had to compare, they were somewhere in-between the Black Keys and Queens of the Stone Age.

Lead guitar and vocalist Russell Marsden wore all black and his guitars matched, but he was anything but dark. All energy and smiles. Blazing through a couple of their older hits like “I Know What I Am”, he’d egg on the crowd, pumping up our enthusiasm. He fed off of us and really seemed to be enjoying himself. His solos were almost flawless and in-between songs he’d toss his picks or tell a little anecdote, but he was always thanking us for giving them the energy they were giving right back.

Bassist/vocalist Emma Richardson is quite a tall drink of water and her height was accentuated by her tight black jeans and what appeared to be snake skin cowboy boots. The delicate but deliberate plucking of her bass strings was artistry to watch, and we were amazed at how perfect her amplification was in relation to Marsden’s guitar. Sometimes it’s hard for a trio to make their sound big enough for the space they are playing but BOS does NOT have this problem.

Drummer Matt Hayward was a flailing mess of beard and long hair. Like a real life Animal (of Muppets fame), smashing his sticks down to the rhythm. He’d even keep time on a cow bell in-between songs when their was a guitar switch or something of the nature. Their pace was break neck and well rehearsed, almost no wasted time through out their set. They did slow it down for one of our favorite songs, “Cold Fame”, which they dedicated to Nashville, since it had been awhile between visits.

All in all it was an amazing show and we never noticed the “sound issues” some of our elitist musician friends mention whenever talking about The Cannery Ballroom. We thought BOS were spot on start to finish, and they rocked our faces off just like we hoped they would. So basically, we say don’t worry about where the band is playing, just go see them for yourself, because in Music City the only way to appreciate music is to see it live.