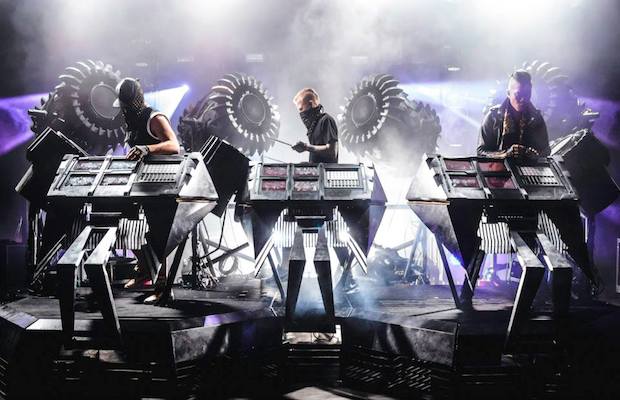 Bonnaroo tends to have a habit of booking high energy electronic and dubstep acts in late night slows, and it appears this year is no exception, as playing late Saturday night (early Sunday morning, technically) will be LA based trio The Glitch Mob. If you’re plugged into the EDM scene, chances are you’ve heard of the Glitch Mob, as few electronic acts have seen the level of success these guys have. They’ve played their dirty, vibrant tunes across the world and at a number of  music festivals, though this will be their first stop at Bonnaroo. The group’s sound simply screams festival; it’s forceful at times and quiet at others, filled with head-bangingly good drops and pristine vocal samples, and most importantly, it’s focused and driven. Each Glitch Mob tune has a clear goal, and the three members slowly build to that goal, revel in the climax, and then begin to back off. That unwavering dedication towards being straightforward with a song is not a trait one often sees in EDM acts, and probably goes a long way towards explaining the success Glitch Mob has enjoyed since their inception in 2006.

So far, Glitch Mob has released just two studio albums and an EP; their most recent album, Love Death Immortality, came out last February and featured the hit track “Can’t Kill Us” (we’ve got the video embedded below). However, we’d actually like to draw our readers’ attentions to one of Glitch Mob’s earlier tracks, “Bad Wings” (embedded below). To us, this track really highlights the Glitch Mob’s unparalleled ability to craft a story out of a song. Sure, it isn’t the most bumping track they’ve put out, but the way the song progresses and the interesting harmony between melody and countermelody is enough to make this one of the more captivating electronic tunes we’ve heard in awhile. If their live show is anything like their records, you can be assured that This Tent is where the party will be Saturday night.