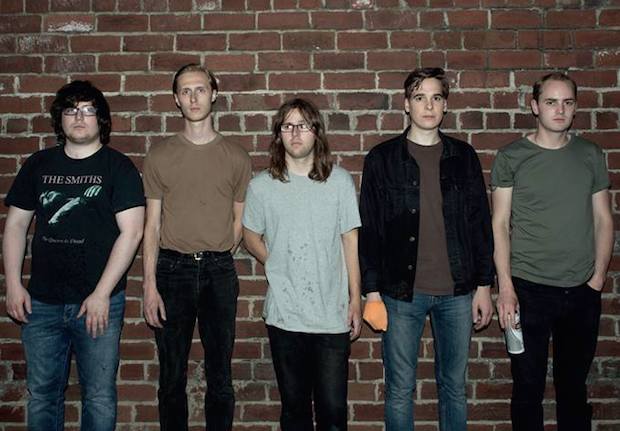 Things tend to slow down a little bit right as festival season is kicking off around Nashville, and that is likely due to the infamous Bonnaroo radius clause that restricts a lot of our favorite up and coming bands from gracing the Music City.  However, on nights like tonight, it only makes our decisions easier.  So, go ahead and make plans to check out Eagulls with Twin Peaks at Mercy Lounge this evening.  Doors open at 8, and things get started around 9pm.  You can still grab tickets to this one right here, and read on for a preview of the bands.

We actually had the serendipitous pleasure of seeing Eagulls in Austin at SXSW this March, but the memories are fuzzy.  After spending about 12 hours wandering from make-shift venue to make-shift venue checking out bands all day, we were tipped off about a Parquet Courts house show going on a good ways out of town.  After narrowly escaping the pedicab with our lives, we settled in for what was sure to be a solid night of rock jams, including the likes of Eagulls.  While we don’t remember every note that was played, we do remember a fucking awesome rock show with a mosh pit that claimed several personal belongings and left us bruised and battered on Sunday morning.  The Leeds UK based five piece bring life to their post punk rock sounds with soaring guitars over bombastic drums.  Get a hint at what we are talking about with their single “Possessed” below.

Chicago based, four piece, scuzzy popsters, Twin Peaks, have been touring pretty heavily in support of their 2013 release, Sunken.  But, they are also hyping the upcoming release of Wild Onion, due out in August.  These rowdy kids went from dropping out of school to life as touring musicians, and they appear to be cut from the same cloth as the likes of The Orwells, Waaves, or FIDLAR.  Tonight marks their return to Nashville after they played at The Stone Fox, last fall.  Get reacquainted with “Stand In The Sand” below, and make sure you get out early enough to catch Twin Peaks tonight!