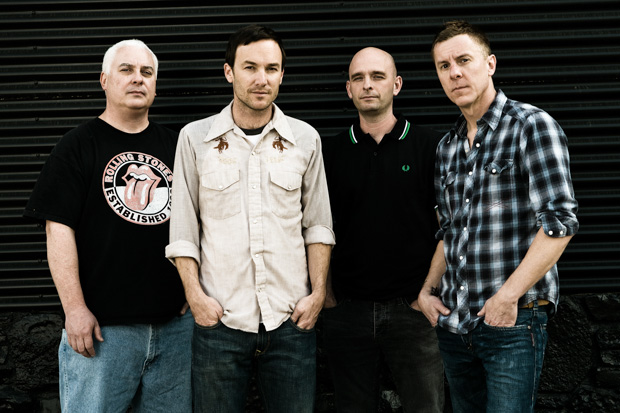 The Toadies shot to national stardom in the mid-90s with their hit single “Possum Kingdom,” and they still have A LOT going on today. In addition to their current tour, including tonight’s show at Exit/In, they have their own annual music festival in Texas, just released the 20-year-anniversary reissue of the album Rubberneck in tandem with a related documentary and beer, and are nearly ready to release another album (hopefully later this year). In addition, drummer Mark “Rez” Reznicek has his own comic book series named Buzzkill out on Dark Horse comics.

We had the pleasure of getting on the phone with Rez for a quick interview to discuss all the above-mentioned topics and to get an idea of what to expect tonight at Exit/In.  If you haven’t already, grab your tickets right here.

We asked Rez about how the idea came about to reissue Rubberneck, and he described, “A couple of years ago, I think we were on tour for our last record Play. Rock. Music. We were looking at the calendar and said, ‘You know, in a couple of years it will be the 20th anniversary of Rubberneck.’ And then we just started throwing ideas back and forth. And said, ‘Well, we should reissue and remaster it.’ One thing lead to another and we decided to do a tour where we play the whole record.”

“To have the entire recording session for the Rubberneck record right there on one disc. It’s pretty cool.”

He continued, “It was really cool when we got the master tapes to do the remastering, there were three other songs that we did at the time and were left off the record. They had never been released or even mixed or mastered or anything like that. So to be able to include those, I thought, was really cool. To have the entire recording session for the Rubberneck record right there on one disc. It’s pretty cool.”

The music world has changed a lot in the past twenty years, but “Possum Kingdom” is still getting regular radio play all over the country. We asked Rez if he had any thoughts as to why “Possum Kingdom” has been so popular for all these years. He said, “I guess it must have been the timing. I don’t know. I’ve been asked why I think ‘Possum Kingdom’ connected with so many people. And I really don’t know why. It’s kind of a weird song with a weird time signature. There’s no real chorus. It never says the name of the song anywhere in the lyrics. It’s kind of a creepy, macabre subject matter. And it’s the longest song on the record, so it seemed the least likely candidate for a single on the album. And yet, that’s the song most people know us by. (laughs) There’s no way to know really. I’m not complaining. (laughs)”

This prompted us to ask Rez how his life has changed over the past twenty years. He described, “I don’t have to get up and go to a cubicle any more. (laughs) I’m happy about that. It’s crazy because back when we recorded Rubberneck we had never really been on tour. We’d play some road shows around Texas, Oklahoma, and maybe Arkansas, but never a full-blown tour just because we couldn’t afford it. And no one really knew who we were outside of really the Ft Worth and Dallas area. So once the record came out… that was kind of our goal; getting signed to a major label and putting a record out. So there would be some promotion and there would be tour support so we could actually get out on the road and play.”

“We’re really doing this! It’s pretty gratifying that people still give a shit and come out to shows after all this time.”

“So going from our first tour to now, who knows how many this one makes… 20, 25, 30? I don’t know how many tours. It’s weird that something I dreamed about when I was a teenager is now kind of my life. We’ve been able to do it for 20 years. There aren’t that many bands that stick around that long nowadays. It’s still a little bit unbelievable, you know. Somedays I’ve kind of gotta pinch myself. Like man, this is really us. We’re really doing this! It’s pretty gratifying that people still give a shit and come out to shows after all this time.”

Lastly, we asked Rez what people could expect from tomorrow night’s show. First we asked about the songs. He described, “We start off the set and do the whole rubberneck album. Then we finish up playing about an hour’s worth of stuff from the other albums. And maybe a couple of covers thrown in.”

Then we asked about merch that would be available. “I wrote a comic book called Buzzkill. Published by Dark Horse Comics. And we’ll be selling that at shows. It’s about a super hero that gets his powers from drinking alcohol and doing drugs. (laughs) Write about what you know.” Buzzkill is a very insightful series about a super hero who is struggling with addiction that makes him powerful but has also been very destructive. He has to choose between sobriety and power.

We asked, “So it will be a pretty big merch selection?”
“Yeah, we have new t-shirt designs. We have a big silk screen tour poster designed by Lindsey Kuhn. We have vinyl and CDs of most of our records at the shows. Yeah, there’s plenty of merch, so bring lots of money. (laughs)”

We know from experience that these guys put on a great show. Join us tomorrow, and rock out with this great little band from Texas.