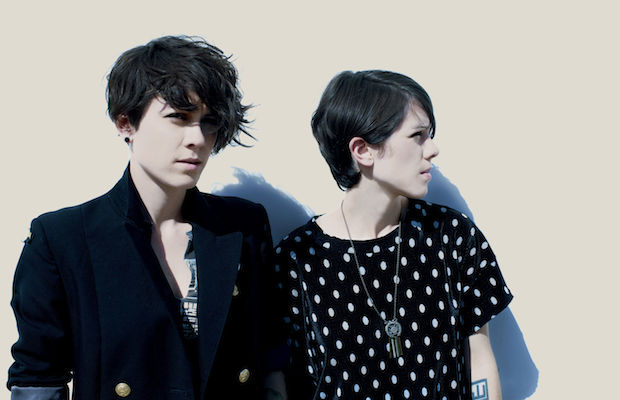 As we announced awhile back, Canadian twin sister indie pop duo Tegan and Sara will make their return to Music City TONIGHT, May 12, at Marathon Music Works. Whether you’ve been a fan throughout their whole fifteen year run (being siblings helps you get an early start), or you’ve recently hopped onboard the Heartthrob wave, this indie rock success story is a site to behold, and one of the best live bands making music today. Adding extra value to the bill, supporting acts Lucius and The Courtneys couldn’t have been more perfectly chosen, and are sure to delight T&S fans (so show up early!). Grab your tickets here, and keep reading for more about all three acts.

When we last saw Tegan and Sara, they were opening for fun. last fall at Fontanel. Tonight, however, marks their first Music City headliner in over four years. In that time, the Canadian twin sisters have seen a massive surge in popularity, propelled by last year’s Heartthrob and its breakout single, “Closer.” Though they still cling to their alt/indie rock roots, Tegan and Sara have, over 15 years and seven studio albums, finally fully indulged their pop tendencies, crafting infectiously catchy radio-ready hits that are still stuffed with substance. They’ve recently toured with groups like Paramore, and will soon hit the road with Katy Perry, but Tegan and Sara remain committed to writing socially conscious, personal, and relatable songs, allowing them to connect with crowds in stadiums just as easily as basements. If you’ve never seen their amazing live show before, tonight’s your chance!

Fronted by dual female vocalists, Jess Wolfe and Holly Laessig, who sing in unison, Brooklyn-based Lucius are a charming, ambient indie pop treat. They released their debut full-length, Wildwoman, last fall on Mom + Pop, and have been gaining buzz for their smart, layered compositions and dynamic stage presence ever since. They’re a perfect fit for this lineup, and are on an inevitable path to follow in Tegan and Sara’s footsteps as a crossover sensation.

Not a far leap from the sound of some of Tegan and Sara’s earlier work, slacker pop trio The Courtneys conjure up southern California vibes (despite their Canadian upbringing), raw energy, and an affinity for ’90s alt rock, grunge, and shoegaze with their eclectic style. They bring even more girl power to the bill, while adding a bump in energy and upping the lineup’s underground rock cred. Show up early because you don’t want to miss ’em!

Tegan and Sara, Lucius, and The Courtneys will perform TONIGHT at Marathon Music Works. The show is 18+, begins at 8 p.m. (doors at 7 p.m.), and tickets are available for $40.