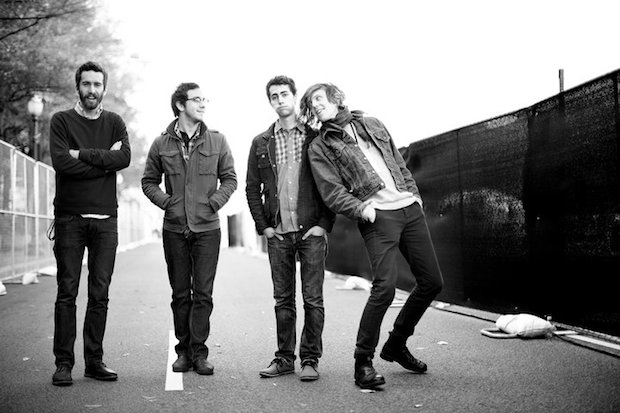 Tokyo Police Club fans fear not, tickets to their May 9th show at Mercy Lounge are still available for just $19.50 here or for $20 DOS. It’s a 18+ show so you can bring your under legal drinking age friends, but get there early for two great opening bands Geographer and Said The Whale. Doors open at 8 pm and the music starts at 9.

If you don’t currently have the scratch for tickets you also need not worry because we found another pair of tickets to give away, but this is your last chance to get in for free before the show this Friday. Not sure if you even want to go or not? Well read on for more information about all three bands and to get a sample of their various sounds. After you’re done scrolling, we’re pretty confident you’ll be on board for the Canadian indie pop-rock superstars and their friends. See for yourself after the jump, and don’t forget to enter to win tickets at the bottom of the page.

This past March the quartet from Ontario dropped Forcefield, their third LP with all original tracks (they also have an amazing album of covers called Ten Songs, Ten Years, Ten Days that is definitely worth a download). We told you a little about it in this post, but feel free to check out the official video for their latest single “Hot Tonight” below. As an added bonus, you can also play the bands retro style video game if you click this link. Tokyo Police Club have been called post-punk revivalists, but to us they cross over genres (alternative, pop, indie) and are just plain fun to see live. Be there this Friday so you don’t have to hear about how awesome it was after the fact.

Geographer are a dream pop, electronic rock trio based in San Francisco that have built a surprising resume as an opening act for bands like Foster the People, Sea Wolf, Atlas Sound and Freelance Whales to name a few. Now on tour with Tokyo Police Club, they hope to take the momentum they’ve built and shift into high gear. Their latest release Myth (2012) highlights their unique synth sounds and wonderful vocal harmonies. They’ve described their sound as “soulful music from outer space” and after you hear their very layered and densely textured din below, we think you may agree.

Fellow Canadians (Vancouver) Said The Whale dropped their fourth LP hawaiii this past September, and hope to ride it’s waves into a bright and lucrative career just south of their native borders. They’ve been a big deal in Canada for several years now, winning the Juno Award (Canadian Grammy) for New Group of the Year (2011) and also being the subjects of a CBC documentary called Winning America. The film crew followed the band as they toured the west coast in route to SXSW Music Festival and climaxed when they won their Juno award. After a couple of line-up changes early on, they have solidified and are ready for you to enjoy their indie folk, hard rock tunes. Check out their hilarious MXE inspired video for “I Love You” and see them perform live Friday.

Must be 18+ to enter, per the show’s age requirements. A winner will be announced Thursday May 8th at noon, and will receive a pair of tickets. For a bonus chance to win, RSVP to the event here, and share it on your Facebook wall. Enter below (you will be redirected to your e-mail, where you will need to hit send):

If you’re having issues with the above form, you can alternately send your full name in an e-mail to [email protected] with “TPC Giveaway” in the subject line, and please let us know if you shared on Facebook.