Bonnaroo Band Of The Day: DakhaBrakha 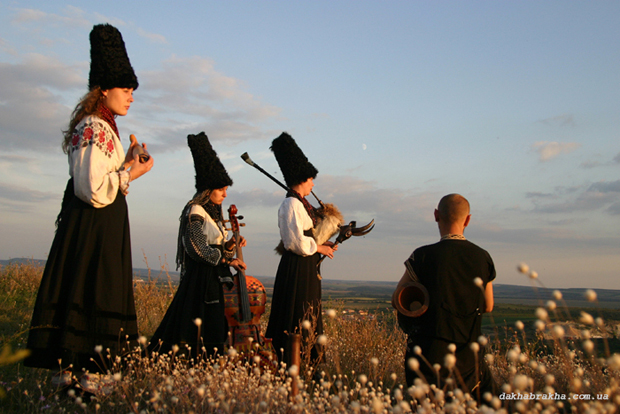 Festivals thrive on unique world music selections.  There is something about basking in the sun on a summer day with rhythmic world music filling your senses.  That’s why DakhaBrakha (Ukrainian for “give/take”) may just be a perfect early afternoon act for you to catch at Bonnaroo this year.  Formed in Kyiv, Ukraine in 2004, the band’s music is based on traditional Ukrainian folk music that is backed by a diverse and unique base of world music rhythm. Accompanied by Indian, Arabic, African, Russian and Australian traditional instrumentation, the quartet’s astonishingly powerful and uncompromising vocal range creates a trans-national sound rooted in the culture of their homeland.

Their unique take on world music varies in their studio recordings from folky to poppy to post rock, but their live performance is far more rhythmic.  This should make them a definitely interesting band to see live, and it will be a first time opportunity for many concert goers… No Country included.  Have a listen to the almost Radiohead sounding “Specially For You” from their 2014 release, Light, below, and then check out their performance from the Rosklide Festival in 2013 to see if this is going to be one of the “new” bands that you won’t shut up about after Roo.

LISTEN | “Specially For You”