Bonnaroo Band of the Day: Goat 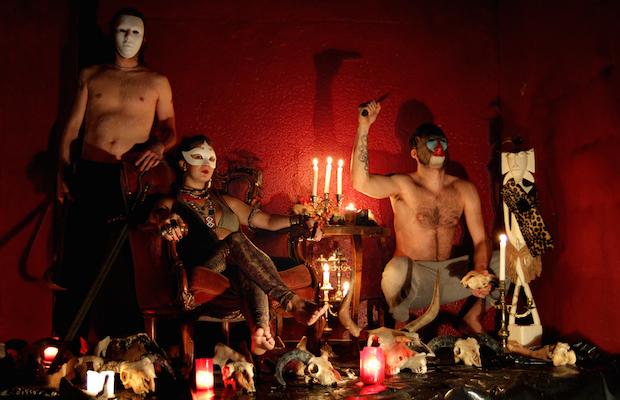 It’s hard to sort fact from fiction from clever marketing when it comes to Swedish fusion/world/psychedelic/experimental rock group Goat. Though now based in Gothenburg, the band claim to originally hail from a tiny remote village called Korpilombolo. According to the Goat’s own bio (but rather difficult to confirm or deny otherwise), the village was visited by a traveling witch doctor, and subsequently fell into the practice of voodoo. After being burned by Christian crusaders, Korpilombolo was allegedly rebuilt, and retains its voodoo principals to this day. Though only verifiably traceable to the late ’90s, Goat claim to have begun as children, and to have existed in different incarnations throughout generations, with its current lineup built around three core members from the group’s village of origin.

How much of the above is true is unclear, though what we do know is that Goat are a compelling and mysterious act, who released their proper debut full-length, World Music, in 2012. Combining elements of worldbeat, rock, fusion, acid rock, and psychedelia, Goat sing in English and channel a hypnotic and tribal sound, performing in voodoo-inspired costume and bringing to their live show dark and bizarre imagery. Their tour history is limited, especially stateside, and if you didn’t happen to catch the group when they recently partook in a run of the U.S. (including a stop at Nashville’s High Watt), Bonnaroo might be your only chance for awhile.