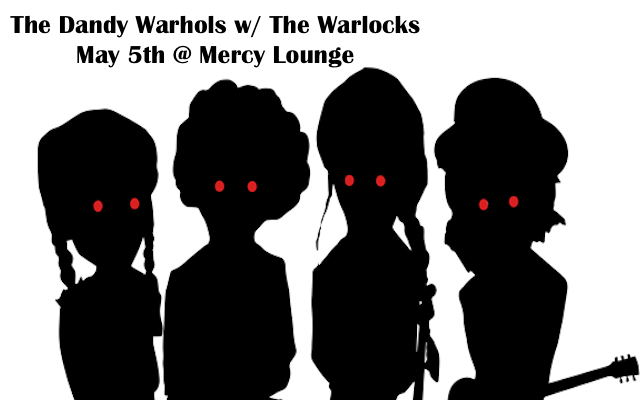 Good news, everyone! We’re giving away another pair of tickets to The Dandy Warhols with The Warlocks on May 5 at Mercy Lounge. The particularly adept among you readers probably have noticed that this is the second pair of tickets we’ve given away to this show, but we had such a great time with the first giveaway last March, we’d thought we’d do it again. Now, these tickets are retailing at $25 + fees apiece, so this really is a pretty good value, especially considering the fact that you’ll get to see one of the most innovative indie rock acts of all time. If you’d like to enter, all you need to do is fill out the entry form after the jump (remember that if you share this event on Facebook, you’ll get your name entered twice), but you need to do it before the contest ends at noon, Thursday 5/1. If you win, you’ll get an email from us, so be checking those inboxes. We’ve also got details on all the bands after the jump, for your educational pleasure.

The Dandy Warhols are one of those rare bands that struck a golden formula relatively early on and spent the rest of their career refining and exploring the boundaries of that formula. In the case of this particular four-piece, the formula involves combining the hypnotizing and captivating power of 90’s shoegaze with the crunch and motion of garage rock. In many ways, the bands earlier attempts at creating this sound, such as 2001’s Thirteen Tales of Bohemia, paved the way for the explosive growth of indie rock over the last decade. You probably recognize their most popular track, “Bohemian Like You”, since it was all but escapable back around 2001-2002. You can check out the official video for that track below, but we’re sure they’ll play it May 5th, so why not just see it live?

Much like the Dandy Warhols, openers The Warlocks have been playing together for quite awhile. This five piece originally formed in Los Angeles back in 1998, but has featured a number of lineup changes since that time. What hasn’t changed, however, is the intriguing psychedelic tones and style of frontman Bobby Hecksher. Throughout the years, the group has delved into many of the various niches of psychedelic rock, but seem to have settled somewhere on the heavier, chaotic side of the genre. While being described as “chaotic” may sound like a bad thing, in reality the Warlocks music is quite pleasing to the ear. In fact, much like a Jackson Pollock painting, the Warlocks’ ability to manipulate chaos into an artistic tool is a major differentiation between them and any other act. We definitely recommend you get to the show early enough to check these guys out, and that you watch the video for “Shake The Dope Out” below.

Must be 18+ to enter, per the show’s age requirements. Winner[s] will be announced 5/1 at noon, and will receive 2 tickets. For a bonus chance to win, RSVP to the event here, and share it on your Facebook wall. Enter below (you will be redirected to your e-mail, where you will need to hit send):

If you’re having issues with the above form, you can alternately send your full name in an e-mail to [email protected] with “The Dandy Warhols” in the subject line, and please let us know if you shared on Facebook.