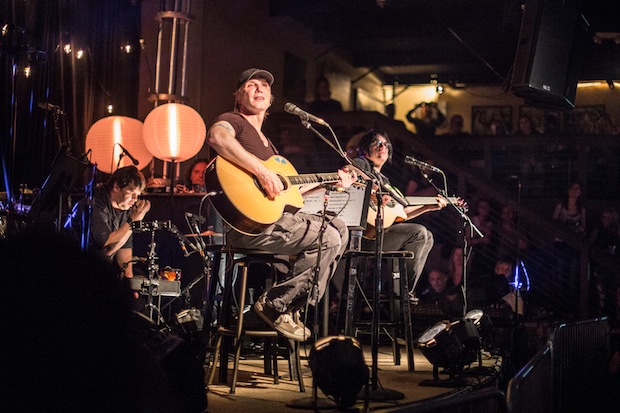 
The Goo Goo Dolls and Run River North played 3rd & Lindsley last Saturday, and gave every one of those SOLD OUT seats in the audience its moneys worth. When you think of 90’s guilty pleasures, Goo Goo Dolls is somewhere between NSYNC and Buffalo Tom, right? Sure, when we decided to cover the acoustic show, we might have thought something like, “Well, the Goo Goo Dolls are a bit old, but it will at least be entertaining… I hope my roommates don’t laugh.” Listen up. We were SO wrong. It’s true, the Goo Goo Dolls have been playing since 1985, and, yep, it’s true that they’re so absolutely massive that all the hipsters may not think it’s cool to like them.  But, there’s a reason that this band is multi-platinum, and is known to millions all over the world. We get it now.

Check out our review with pictures to find out more about Goo Goo Dolls’ killer opener, Run River North, and get a little taste of pride for your nostalgia after the jump.

3rd & Lindsley had a line too long for the sidewalk when we arrived as the doors were opening at 6:00 PM. We strolled in and were surprised that the venue had kept the table sections all the way up to the stage. It suddenly hit us that this would be one seriously intimate show. We found a seat with some friendly strangers and grabbed some beers.

ENTER RUN RIVER NORTH. This is only the second time the six piece LA band has played in Nashville, and the first was their debut gig outside of LA. As Alex Hwang said half jokingly in our interview earlier this week, they like to say they are a “gangster-folk oriental” genre. We overheard the people around us whispering in confusion about their name and if they were local, but, rest assured, they won’t forget Run River North. They opened with a song written by Hwang titled “Monsters Calling Home”, which has powerful peaks and valleys highlighted by violins and deep lyrics about the band’s Korean immigrant families. It is also the band’s former name. The young six member band, assembled in 2011, is uber-talented with everyone singing in complex multi-part harmonies. True to their name, their music has the ebb and flow of a powerful and dynamic river. They played with two violins, acoustic guitar, bass, tambourine, mandolin, and with drummer John Chong on cajon. Late in their set, they politely asked if they could play us a cover, and to everyone’s delight, they played a killer *cough cough* version of “Mr. Brightside”. Alex began it softly, before the violins joined him to make their version so sad and beautiful. Run River North ended their set with “Fight to Keep” that started with a triumphant a cappella intro. Those friendly strangers next to us leaned over and said, “They’re blowing my mind right now!”

There was a lengthy intermission before Goo Goo Dolls took the stage, building anticipation and getting all the middle-aged woo-girls primed and ready for Mr. Rzeznik. That’s right, we saw y’all.

The iconic John Rzeznik and Robby Takac began their 19 song tour setlist dubbed Otis Midnight Sessions with “Sympathy”. The tour is in support of Goo Goo Dolls’ recent album Magnetic, but don’t worry, they played all your old favorites. Rzeznik still has all of the swagger and voice that he ever did, but it’s even more impressive that he sang the entire set with gum in his mouth. In this small venue setting, and with the band playing on stools, it gave the audience an environment of community with no rockstar intimidation. Before playing “Name”, Rzeznik informed the audience that it was the first song that landed the band on the radio… and it was also the first time they got sued. He also gave us some food for thought when he mentioned that “Slide” was once called the darkest song in the ’90s. “Really?” he says, “When there was also a song out there called ‘Rape Me’?” Run River North returned to the stage during the Goo Goo Dolls’ set with background vocals and violin, and Rzeznik gave appreciative shout outs to them several times.  Goo Goo Dolls expertise was showcased during “Come to Me”, which was the pinnacle of our evening. During the song “Rebel Beat”, from Magnetic, everyone was singing and dancing. Rzeznik kept up the relaxed atmosphere by telling a joke that was played on him the first time they played in Nashville at Exit/In. He once thought that he’d have to find a fiddle player because someone told him that the “Nashville Board of Fiddle Players” require one to play in the venue. Like we said earlier, Goo Goo Dolls know how to entertain, and they can back it up with top-notch music. They’ve only perfected the art with time, and of course, they ended their set with “Iris” to which our little listening community replied with gratitude.