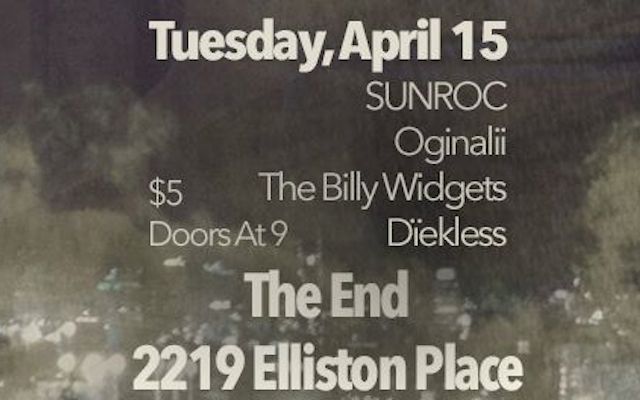 Whether you like it or not, modern day Nashville is something of a breeding grounds for songwriters and musical acts. Here at No Country, we love our city’s dedication towards pumping out new acts, and we like to highlight shows around town that you may not have heard of, despite the bands being awesome. This preview would be an example of this, as we’d like to make our readers aware of a show going on in one of the smaller venues around town, The End. The headliners for the evening is local energetic punk rockers Diekless. Opening for them is Knoxville based indie rock quartet The Billy Widgets, local bluesy, female-fronted acoustic rock act Oginalii,  and local (and newly founded) rock act Sunroc.

The entire affair will begin at 9 pm (that means doors at 8, folks), and tickets are still available for a mere $5. Like pretty much every show at the End, this one’s 18+, so, if you can vote, you should be sure to come out and enjoy all four of these awesome acts; this show presents a really great sampling of bands in a variety of genres and scenes around Nashville, so if you want a crash course on Nashville’s independent music scene, this show is not a bad place to start. If you’re going, however, you’ll want to know a thing or two about the bands. Luckily for you, we’ve got all that info and more after the jump.

If you’ve never been to a Diekless show, well, you’re in for a treat. Diekless is without a doubt one of the rowdiest and most entertaining punk acts to come out of Nashville in the last few years. In fact, Diekless covers just about every aspect one needs to be a successful punk act: they’re loud, chaotic, destructive, and basically storm around the venue like a hurricane of crunchy tones and nearly inaudible vocals. It’s a pretty stunning thing to witness, and you may find it impossible not to get hyped up. Take our professional advice: join the pit. You’ll have the time of your life (though it’s not our fault if you get punched in the face or otherwise injured. That’s just punk rock.)

The Billy Widgets are the only band playing tonight that are not from the Nashville area. They are, however, from Tennessee, and we don’t mind supporting the scene over in Knoxville every now and then. The Billy Widgets have been making a name for themselves with their smooth vocal styling, but to us their greatest strength seems to be their sense of groove. If you don’t believe us, just take a listen to the video below. We were going to point out a particularly jamming section of the song, but to be honest, the entire work keeps a pretty upbeat and satisfying groove throughout. The Billy Widgets are definitely a band that knows how to throw down, and we can’t wait to witness them do just that this evening.

Let’s go ahead and start with a disclaimer: until very recently, Oginalii was, in fact, a five-piece act. However, a recent turn of events has whittled the official lineup down to two (Emma Hoeflinger and Karalyne Winegarner). Rumor has it that a temporary backing band has been put together for this show, which should make things interesting for attendees. However, we’re sure that Hoeflinger and Winegarner will have no trouble with that transition. After all, the rich vocal melodies and intricate songwriting still hasn’t changed. Oginalli seems poised to take on some really interesting opportunities in the future, and we have no doubt they’ll find some success here in Music City. If you come out tonight, you can brag to your friends about how that you saw this awesome acoustic rock act back when they were still playing The End.

As far as we are aware, the show this evening is actually the first ever show for Nashville based quintet Sunroc. So far, they’ve put up two covers: “Little Wing” by Jimi Hendrix and “Rocky Mountain Way” by Joe Walsh. Based solely on the strength of these two tracks, we’re anticipating their show this evening to be quite entertaining. Plus, how often are you able to say that you were able to witness a band’s first show ever? We really encourage all of our readers who are planning on going to this show to get out there earlier enough to catch Sunroc and be a part of the start of something cool.