Bonnaroo Band of the Day: J Roddy Walston & The Business 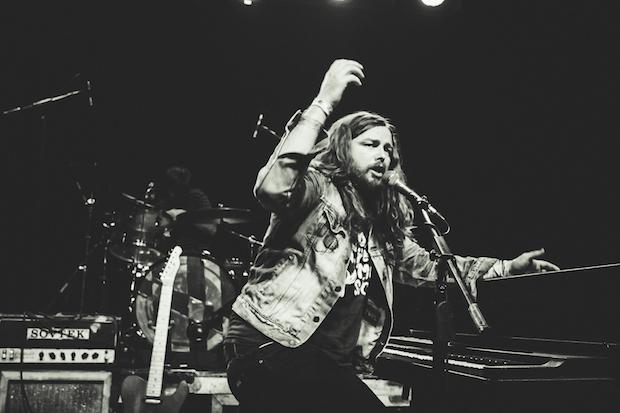 J. Roddy Walston & The Business last played Bonnaroo in 2011.  Do you know how we know that?  Because we saw J. Roddy and company ripping up that little tent at the far nether regions of the main stage in 2011, and we were immediately hooked.  Their bar room, up-tempo, frenetic rock n’ roll is enough to attract any of you if given the chance, but their stage presence will surely seal the deal.  To say J. Roddy Walston & The Business leave it all on the stage is an absolute understatement.  When that show ended at Roo 2011, we were left with a worn out J. Roddy laying in a pool of sweat flat on his back, as if the piano finally had enough of his incessant pounding and blasted him away.

Our introduction to J. Roddy Walston & The Business came from their 2010 self-titled sophomore release which starts off with an absolute barn burner titled “Don’t Break The Needle” and really never lets you go for 37 total minutes.  Now signed to ATO Records, JRW&TB are still burning down the house with their 3rd release Essential Tremors.  Having already seem them perform this live at Exit/In last fall (yes, the same night as Salvador Dali Parton), this is another DO NOT MISS act at the farm this summer.  And, given that Walston is originally from Cleveland, Tennessee, you should probably get there early before his family and friends clog the stage.  Check out the new track “Heavy Bells” below, and then check out a video of the song that started it all for us!