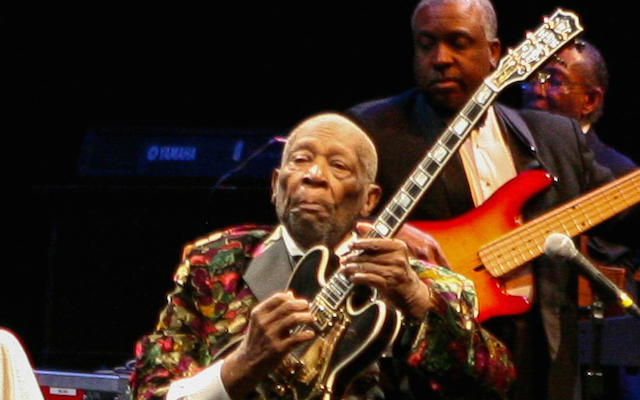 Hey No Country readers, we’ve got something really special today. On Monday, we were joined by photographer Michael Brooks for the sold out B.B. King show at the Schermerhorn Symphony Center downtown. Now, if you’ve never been to the Schermerhorn, you should understand that he place is absolutely classy; it’s the official home of the Nashville Symphony Orchestra, so you can imagine all of the niceties housed there. Between the marble and hardwood floors, symphony boxes dangling off the walls, and suit-clad ushers bringing you to your seat, seeing a show here just feels totally different than anywhere else in town, except, perhaps, The Ryman.

Anyways, we’re excited to share with you our thoughts and photos below. After all, how often do you get to see someone as legendary as B.B. King perform? Stick around after the jump for our review of the show, which also included The Robert Cray Band.

The entire evening felt like one of those events you’ll remember for the rest of your life. You know what I’m talking about; this was the kind of show that, when you’re 85, you’re probably lean in, look your grandchildren in the eye, and inquisitively ask “Have I told you about the time I saw B.B. King and Robert Cray play back in 2014? Hot dog!”

On second thought, you might not say “hot dog” (that’s more of a personal response). However, the point we’re trying to get across is that the vibe that night was just so right. From the moment that The Robert Cray Band stepped on stage to their closing cover of Bobby Blue Bland’s “Deep In My Soul,” the audience was held in rapt attention and with growing grins.

In many respects, Robert Cray is one of the most important blues guitarists of our time. Sure, he might not yet have reached B.B. King status, but, then again, he’s not as far along in his career. Prior to seeing this show, we always thought Cray’s reputation came from his guitar/vocal abilities, and, while both of those were absolutely on point, we were pleased to find another reason that Robert Cray has achieved his success: crowd interactions. Cray makes jokes, thanks the audience, and clearly articulates the name of the next song before he plays, all while maintaining the most relaxed, easy-going mood possible.

Another interesting thing to note about Robert Cray is that he mouths his guitar parts while playing them. This was particularly noticeable in songs like “Poor Johnny,” “Phone Booth,” and the perpetual crowd-favorite “Smoking Gun.” It’s often said that moving one’s mouth when playing is a sign of a truly passionate guitarist, and, in fact, many of the most celebrated guitarists do this. Now, we were pretty much positive that Cray was a passionate guitarist before we even went to this show, but it was interesting (and occasionally amusing) watching him work out all of his licks with his vocal chords before transferring them to his guitar.

If you didn’t pick up on it in the last few paragraphs, we really respect Robert Cray and the work he’s done, and we felt his performance was fun and musically engaging. That being said, the man wouldn’t be anywhere without his band. We’ve got to give a shoutout to Les Falconer, the tightest drummer we’ve seen in a minute. We’d also like to acknowledge the awesome keys work performed by Dover Weinberg, who, we must note, looked altogether quite pleased to be up on stage. Finally, Richard Cousins did a spectacular job of holding things down on the bass guitar. In all, these four musicians worked together to create a performance worthy of the lofty hall it was held in, and we’re quite glad we were there to witness it.

While The Robert Cray Band certainly had the charisma and tunes to be a headlining act this evening, they eventually conceded the stage to the 8-piece backing band of B.B. King. Interestingly, this band was a mixture of many of B.B. King’s longtime friends and bandmates (including his nephew), along with some newer faces. However, it would be safe to say that the backing band absolutely threw down. The group soloed and improvised on top of each other for two entire songs before finally calling out the King of Blues himself to the stage.

Watching B.B. King hobble out on stage, clad with a technicolored jacket and a massive smile, was quite surreal. From the moment the man was even remotely visible, the entire crowd was standing and cheering. This wasn’t one of those standing ovations where one person stands and begins a chain reaction throughout the crowd, either. It seemed as if everybody simply understood that when one is in the presence of B.B. King, you better stand up and show some respect.

Soon after King’s lionized entrance, he began playing a few of classic tunes. We’d like to go ahead and get something out of the way here: yes, King’s guitar chops have slowed down a ton over of the years. While it was certainly inspiring to watch the man play, you can tell that health and time have forced him to slow down a ton. That being said, King’s voice and attitude remained as unchanged as ever. He seemed to have no problem crooning to many of his old hits in a voice that sounded surprisingly large for the body it came from, and he definitely enjoyed telling jokes and interacting with the crowd between songs.

Perhaps one of the most telling moments of the performance came about halfway through. King had just launched into a cover of “You Are My Sunshine,” before immediately being interrupted by his granddaughter, who was standing to the side of the stage. She had shouted at him that he was playing the wrong song, which did seem to perplex King for a moment. However, he quickly communicated the fact across the band, smiled, and told the audience that “my granddaughter just informed my I’m not playing the right one. Hmm.” He then immediately launched into “The Thrill is Gone,” much to the delight of audience. At the end of the tune, he reflected on what he had just done, and, as suddenly as it had ended, King and his band went back into “You Are My Sunshine.”

Also, interestingly, his band actually took crowd requests. As in, throughout the entire show, someone was yelling “play ‘Sweet Sixteen'” after just about every song. Eventually, King looked up and asked what was being yelled. Someone told him, and he just shrugged and said “‘Sweet Sixteen’ it is.” Both he and the band absolutely killed it on that song, despite it being a request and not part of the official setlist.

Sure, no one wants to hear that a performer messed up the set list, and, yes, maybe King’s playing wasn’t as tight as it would have been 30 years ago. However, his band, stage, and crowd management skills are all still intact, and, even now, it’s pretty obvious why B.B. King has obtained the celebrated status that he posseses. His adaptability and charisma on stage has kept him afloat this long, and, even despite talk of the guitarist’s playing slowing down a bit, there’s at least one publication here in Nashville that was grateful for a chance to see this living legend do what he does best.