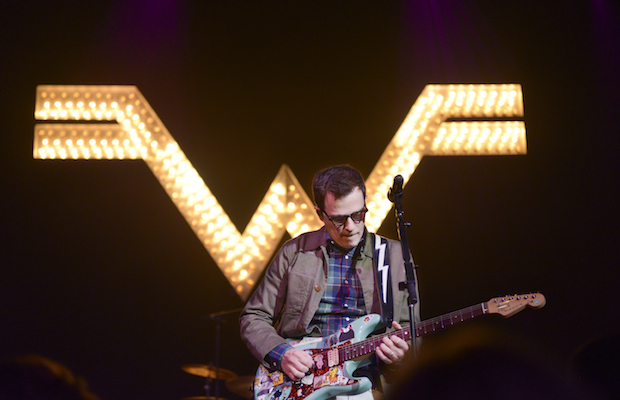 Ask any Weezer fan, even the diehards, and they will almost surely admit, Weezer in 2014 is a vastly different band from the group who exploded onto the scene nearly two decades ago to the date, with the release of their self-titled, debut album (generally referred to as “Blue”). A strange example of regression in many respects, both thematically and in musical focus, Weezer have proven capable of recreating the elements that make them the most commercially viable, but have arguably ditched the heart and soul that so passionately drew fans to their earliest releases, “Blue,” and, most notably, 1996’s sophomore release, Pinkerton. An interesting release in of itself, Pinkerton was once panned and considered a flop, dismissed as a mistake by even the band itself until recent years (the tide of public opinion shifted much sooner). Now, 18 years later, Weezer not only celebrate Pinkerton as an achievement, but have also gone so far as to perform the record in full intermittently over the past few years, generally proceeded by a night of its more critically and commercially successful predecessor.

The latest “Blue”/Pinkerton two-night outing took place this weekend at Nashville’s Ryman Auditorium, and we were in attendance for night two. An interesting special event in the middle of what is, otherwise, a conventional tour, Weezer’s rendition of Pinkerton reaffirmed not only their lasting relevance and indescribable influence on today’s musical landscape, but also the band’s mantle of true legendary performers, capable of balancing the more stadium-primed act they have become with the passionate, emotionally resonant, and more introspective band they once were. The Pinkerton show, which also featured a set of “greatest hits,” included up and coming alt rock outfit The Last Internationale, whose hard-hitting drummer, Brad Wilk, is best known for his work behind the kit for seminal groups Rage Against the Machine and Audioslave. 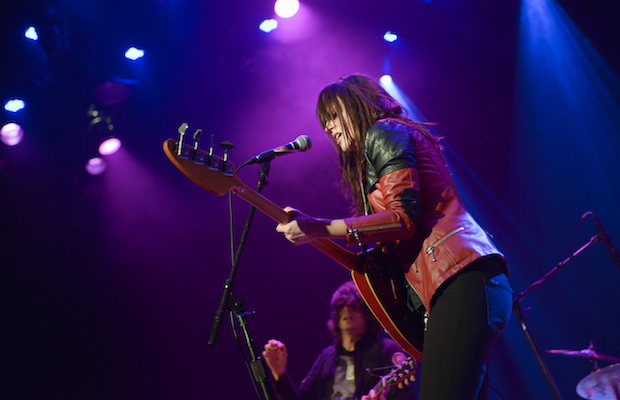 Though Brad Wilk might be the most recognizable face in New York’s The Last Internationale, he’s just one part of a powerful rock and roll trio, rounded out by frontwoman/bassist Delila Paz and guitar virtuoso Edgey Pires. A relatively new act, with just an EP and some stray singles under their belt, I went into the show not fully knowing what to expect. Paz entered the stage alone, armed with only an acoustic guitar, launching into passionate protest song “Workers of the World Unite!” A poignant and effective way to introduce not only her folk-tinged sound and haunting voice, but also her band’s full socially charged agenda to what was, presumably, an all-new audience, the song made one point straight away: we were in for a very un-Weezer-like performance.

The rest of The Last Internationale’s set took a turn for the more upbeat, alternating between more drawn-out, folk-inspired numbers and more traditional alt rock, guitar heavy tunes. When they wanted to rock out, the group proved that they could get loud, but, for the most part, they exhibited restraint, careful not to overpower the message and counterculture attitude that laced every song. For a somewhat strangely paired opener, the audience responded enthusiastically, even dancing with Paz when she hopped off the stage to sing amongst the crowd (a Ryman first, for me). With a new Brendon Benson and Brendan O’Brien produced full-length right around the corner, I’m curious to see how quickly this band will take to catch on, once they have a proper debut to showcase. Regardless, I found them to be a technically impressive, electrifying, socially admirable, and a downright fun beginning to what would become one of the best shows I’ve ever witnessed at The Ryman, bar none. 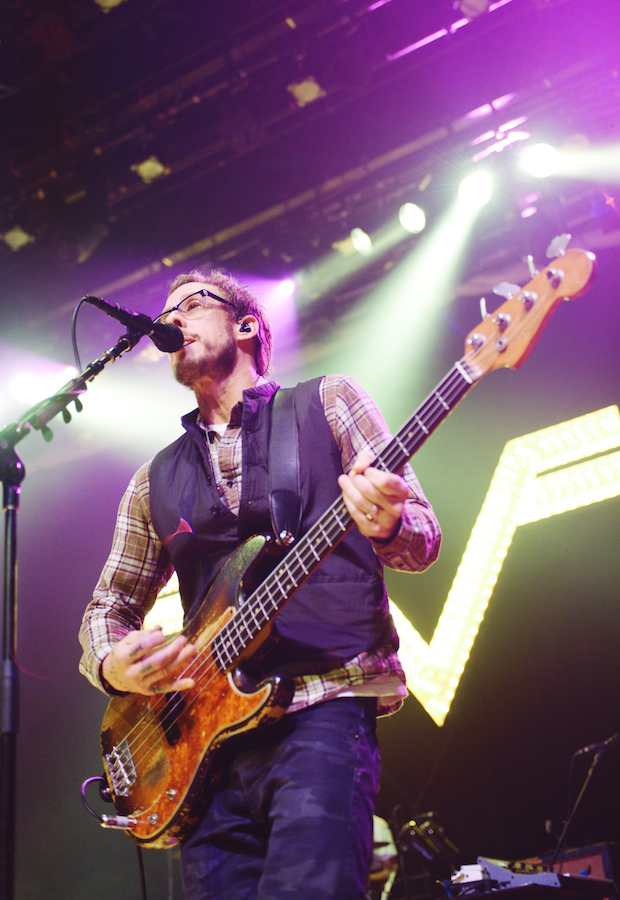 Backed by just their trademark “W” and minimal production, Weezer stepped onto the stage and launched into their sold out show with little fanfare; and they didn’t need any, because the room felt primed to erupt from the first second. This wasn’t my first Weezer show, but it was, by far, the most up close and personal one I’ve experienced. Weezer have gone through many phases as a band, and enigmatic frontman Rivers Cuomo has tried his hand at being a “rock star,” which, for a time, caused a personal rift that carried over into the group’s live show. Fortunately, all of that drama is far-removed these days, and Weezer seem as happy, healthy, and genuinely excited to be performing together as they ever have, and that fun is infectious. One of my biggest gripes with ’00s Weezer is how they’ve distilled their songwriting style to hover in the realm of simplistic (yet, often, still pretty great) pop and have moved away from personal, emotional lyricism to more sophomoric themes of sex, partying, and vague anthems for fun and camaraderie; pleasant, functional subjects, to be sure, but a far-shot from the gut-wrenchingly honest “Blue” and Pinkerton days. It’s not until you see these new songs performed live, however, that they feel more gratifying (a fact I forgot). Sure, singles like “Memories” and “Island in the Sun” might take a simple thematic approach that lacks the depth of early hits, but they sure are fun as hell to sing along to with 2,000 other fans.

Weezer’s show was divided into two parts, beginning with a ten-song “greatest hits” set, which touched on tracks from all of the band’s albums in reverse chronological order, save for 2009’s forgettable Raditude. Whether or not these hits were the band’s “greatest” is a different discussion, but the “Red” album heavy set was a pleasant surprise, and inclusion of “The Greatest Man That Ever Lived (Variations on a Shaker Hymn),” hands down one of the group’s best and most ambitious tracks of the ’00s, was downright amazing. True to their typical performance approach, Rivers shared the love, and let guitarist Brian Bell take the vocal reins on Malardoit banger “Keep Fishin'” (and, later, Pinkerton‘s “Why Bother?”). The only oddball choice of the set was “Red” album closer “King,” which, most likely, was selected to showcase bassist Scott Shriner on lead vocals. Only drummer Patrick Wilson was exempt from a vocal turn, but we’re told he got his go the night before, on “Photograph.” Besides their fun, confident, and infectiously energetic delivery, lighthearted demeanor, and mismatched style (Bell, as the “cool one;” Rivers, rocking grandpa slacks and even a cowboy hat for a song), Weezer possess an intangible quality of greatness in a live setting, one able to win over even late-career cynics like myself, with little effort. Additional highlights of set one included new, screwball jam “Back to the Shack,” and a blink-or-you’ll-miss-it cameo from Cuomo’s six-year-old daughter, Mia, on keyboard during “Perfect Situation.” There was also a moment of near-castrophe, as an overly-enthuastic (or, more likely, overly-inebriated) fan nearly took a tumble off of the balcony during a rowdy singalong. 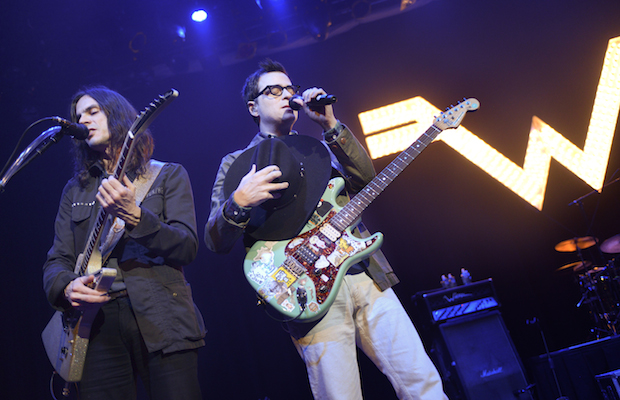 Using the set divide as chance to have a long-time crew member share stores (and photos) of life on the road, with a special focus on the Pinkerton era, Weezer’s set split lasted just long enough to leave the entire room boiling with anticipation for exactly what they knew was to come; a sensation not often experienced at concerts. When the projector screen lifted and the band returned, their lighted “W” had been subbed for a larger than life Pinkerton cover backdrop, and they proceeded to play the album, track for track and note for note, so faithfully, so genuinely, that the entire experience felt transformative; a time machine back to 1996. A key influence on the late ’90s indie/emo explosion, Pinkerton serves as a template for heart-on-your-sleave, abundantly honest, smart/nerdy/20-something rock, a fact that was lost on nearly everyone upon its initial release. The seminal, fan-favorite record has only gotten better with age, and stands out as Weezer’s rarest, rawest, and most exposed. Because of this, and because of many of the songs’ thematic nature, even, I wondered how Cuomo and co. would tackle it, far-removed from the songs and sentiments 18 years after the fact. Whether simply going through the motions (experienced musicians as they are, after all) or still connected enough to play Pinkerton in the way it was conceived, Weezer’s second set felt so real, so earnest, and so dramatically different from the lighthearted earlier-evening jaunt. I could have gone home happy after set one, to be honest, but pairing it with something so spectacular as Pinkerton, and performed so expertly and passionately as only Weezer can, helped push this to become, perhaps, the best show I’ve witnessed so far in 2014

Pinkerton is an album that meant and continues to mean so much to so many people, and witnessing it performed in full, with a packed room singing every single note at the top of their lungs, was a surreal, unforgettable experience. For me (and for many Weezer fans around my age, I’d imagine), its impact is immeasurable. Whether or not I consider myself a Weezer fan (I do, despite some reservations), I consider myself a diehard Pinkerton fan, and to see its creators play in it a setting like The Ryman and in the way it was meant to be heard- that’s a once in a lifetime experience. It’s hard to highlight any one standout moment, since Pinkerton is a near-perfect album, packed with ten uniquely different and amazing songs. It seemed fitting, however, that the set (and evening) would end with one of the most restrained, emotionally visible, and personal songs in Weezer’s entire catalogue: acoustic tune “Butterfly,” which Cuomo performed with only the assistance of a crew member on percussion. And that was it. Weezer wisely chose not to disrupt the experience with an encore since, literally, no encore could compete with the album they had just performed. One of the most compelling, frustrating, and strangest bands in the history of music, there’s one fact about Weezer that is undeniable: when they’re at their best, no one else can compare.

Tired of Sex
Getchoo
No Other One
Why Bother?
Across the Sea
The Good Life
El Scorcho
Pink Triangle
Falling for You
Butterfly

1. The Last Internationale @ The Ryman Auditorium – 4.6.14 // Photo by Mary-Beth Blankenship

2. The Last Internationale @ The Ryman Auditorium – 4.6.14 // Photo by Mary-Beth Blankenship

3. The Last Internationale @ The Ryman Auditorium – 4.6.14 // Photo by Mary-Beth Blankenship

4. The Last Internationale @ The Ryman Auditorium – 4.6.14 // Photo by Mary-Beth Blankenship

5. The Last Internationale @ The Ryman Auditorium – 4.6.14 // Photo by Mary-Beth Blankenship

6. The Last Internationale @ The Ryman Auditorium – 4.6.14 // Photo by Mary-Beth Blankenship

7. The Last Internationale @ The Ryman Auditorium – 4.6.14 // Photo by Mary-Beth Blankenship