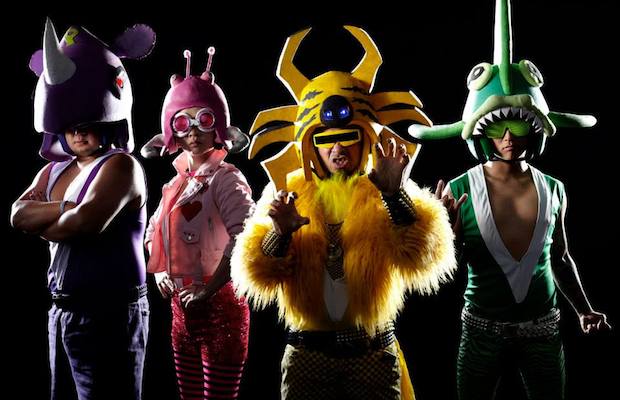 Japanese born, New York based “action comic punks” Peelander-Z seem to make it to Nashville several times a year these days, and that’s more than alright with us! Out in support of their latest fill-length, Metalander-Z (yep, it’s more metal-influenced than their typical punk leanings), the band-meets-performance-art group will bring their out of this world stage show to The High Watt, supported by fantastic locals Meth Dad and Mystery Twins. If you’ve never seen a Peelander-Z show, then this thing should be mandatory, and if you’re one of the indoctrinated then you already know: there’s nothing else quote like it. Keeping reading for more!

Peelander-Z are not an easy band to describe. They refer to themselves as “Japanese Action Comic Punk hailing from the Z area of planet Peelander.” That says more about their persona than their sound, and we’ll come back to that. Stylistically, the band play a pretty no-frills, fast, high-energy, old school flavor of punk rock, and, lately, metal. Their music is a lot of fun and it’s solidly entertaining, if not really boundary-pushing. The music isn’t the reason you HAVE to check out a Peelander-Z show though; it’s the show. Imagine one part Aquabats (and perhaps a bit of their brainchild Yo Gabba Gabba!), one part Power Rangers, and one part anime, blend that together, feed it some speed, and and take it to the weirdest Halloween party you’ve ever been to, and you’ve got the basic idea of a Peelander-Z show. The band perform in costume and in character, with an infectious energy and downright bizarre presence. They’re fun, hyperactive, engaging, and even for fans and non-fans of their music alike, their performance is an undeniable and unparalleled rush that’s impossible not to love.

We couldn’t think of a more perfect compliment to Peelander-Z than Nashville’s Meth Dad. Though stylistically, Meth Dad, the stage alias of Tyler Walker, tends to be a little more calm and electronic, his live show is equally as unpredictable, high-energy, and antics-filled. A party starter and a true showman, Meth Dad is one of the most fun and constantly evolving live acts in town.

Local duo Mystery Twins will get things started on a calmer note, boasting a layered, no-frills rock sound with haunting and unparalleled harmonies. It seems fitting, actually, in the context of the show, to start on a more “normal” note and build towards the spectacle of Peelander-Z. Be sure to show up early!

Peelander-Z, Meth Dad, and Mystery Twins will perform TONIGHT at The High Watt, with a DJ set from Brandon Jazz. The show is 18+, begins at at 9 p.m. (doors at 8 p.m.), and tickets are available for $10.