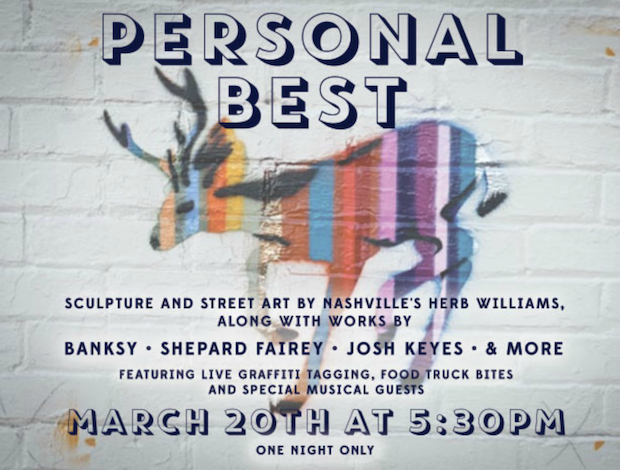 Herb Williams (the Nashville-based, Alabama-born artist, not the former basketball player), will continue OZ‘s new monthly local spotlight series, Thursday Night Things, which kicked off last month with Chancellor Warhol and is sponsored by Native, this evening, with a one-night art exhibition, Personal Best. In addition to Williams’ own sculptures, the exhibit will features works from renowned artists such as Andy Warhol, Rene Magritte, Banksy, Shepard Fairey, and many more!

The show is also slated to feature food, live graffiti tagging, and an acoustic performance from an unnamed musical guest. Herb hinted that the band had “performed on late-night TV, had major tours and one of their songs is currently used in a TV commercial.” That, coupled with this Facebook post, all but guarantees local faves Moon Taxi will be making an appearance.

Moon Taxi are a great reason to attend, but this show’s really all about the art, and you can read more about the exhibit in detail right here. Doors open at 5:30 p.m., and tickets are available for just $5!