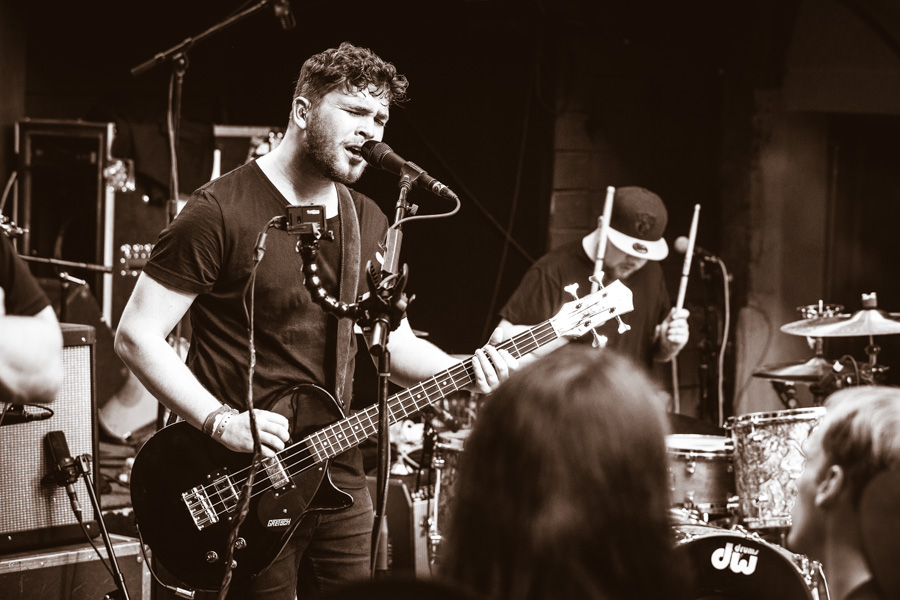 Quite a few of us that kick it around the No Country office made the pilgrimage down to Austin for another overwhelming South By Southwest experience.  We all found new bands, made new friends, and had an all around amazing (and exhausting) good time.  Some of the highlights included HAERTS, Wanda Jackson, Sylvan Esso, Royal Blood, and a bunch of our favorite local bands that we managed to pack in as well.

We’ve decided to round up our favorite moments of SXSW 2014 in an interview style roundtable.  Check that out below along with a handful of some of the top photographs that Shawn Jackson of Sundel Perry was able to grab for us!

What was your favorite show that you saw?

Sylvan Esso at Holy Mountain. I truly felt like “I don’t know WTF you’re doing at SXSW if they aren’t on your list of bands to see!!!” I want to go back to that show and stay a long while. I can’t wait for their upcoming debut. “Hey Mami” and “Coffee” are on constant repeat in the meantime. Hopefully we will be graced by a Nashville show soon. [LT]

Royal Blood at Cedar Street Courtyard. They absolutely brought the house (err…. courtyard) down! Honorable mentions have to go to the rooftop set with The Black Lips, the one-handed (no fretting hand) stand-up bass player for The Flametricks Subs at McCabe’s Pub, and the “secret” house show with Parquet Courts. [MH]

Wanda Jackson. I’m a bit mystified why I hadn’t paid more attention to her before. The show blew me away, and I immediately got her record at Third Man after I got back. [SJ]

I saw Haerts twice. Their set at the Empire Garage cemented how well-earned all the praise is. Nini Fabi is so intense. She has this magic gaze that grips the whole audience. [WD]

Did you catch a bunch of Nashville acts?  If so, who was the most memorable?

I didn’t catch a single one but I gushed about Nashville bands to Ann Powers of NPR. I would have loved to catch Nikki Lane on Willie’s Ranch since he is her idol but I was insanely busy running around with clients, hitting as many of their shows as possible and networking like crazy which is what SXSW is all about for industry folks. [LT]

Saturday was like a full day of Nashville bands for me… including a house party with *repeat repeat, ELEL, & Allen Thompson; Sol Cat at Shiner Saloon; and Vinyl Thief at BD Rileys (who literally stopped people in their tracks on 6th Street). The night before I caught Bully’s packed set for the Exit/In showcase at Parish Underground, but we couldn’t get back in for Diarrhea Planet because there must have been 200 badges in line hoping to get into the already packed venue. [MH]

*repeat repeat and ELEL were great when we saw them at a house party Saturday morning. They all sound great and have so much fun, it’s contagious. [SJ]

I caught Cherub at Pandora. I never get tired of those guys. Jordan, Jason, and I laughed a lot about Tinder after their set. [WD]

Did you find anyone new that you want to tell everyone about?

Royal Blood, Royal Blood, Royal Blood…. We got a text from some pretty influential industry folks that were checking them out, so we decided to stop in for a beer.  Needless to say, I was picking my jaw up off the ground after that set.  Just a bass and metal-inspired drums had the crowd completely rocking for their entire set.  Keep an eye out for this British two piece, you’ll be hearing a lot more about them soon. [MH]

Same… Royal Blood.  I’m really hoping they come out with an LP soon.  But for now, YouTube will have to suffice.  Also, Hedvig Mollestad Trio from Norway.  Very heavy instrumental jazz-rock with tons of energy on stage.  It’s fun to listen to, but it’s even more fun to watch them play. [SJ]

Danish electro-pop singer Mø (pronounced “muh”) was just phenomenal. She slayed a packed Spotify House in the middle of the day with freaky dance moves and a go-hard attitude. She even got in the crowd a few times. Found out she had the flu later, so hopefully she wasn’t too contagious. [WD]

Which show/party should you not have gotten into?

St. Paul & the Broken Bones! It was because the venue was at capacity with a line around the block and rightfully so. After exhausting all finagling options, checking all locked doors in the attached building and getting caught trying to sneak through a barricaded door, we finally were able to get a “secret phrase” to tell the security guard and made it in! [LT]

Probably the Spin Day Party at Stubbs.  At least, we shouldn’t have been so well taken care of.  Upon arrival, we were treated amazing, and ushered straight up to VIP to meet Goodbye Motel (super cool folks).  We also got to catch up with Wild Cub, who were preparing for their set later that evening.  Always good to see those guys as well! Thanks Spin! Honorable mention to the publicist who tipped me off to the Parquet Courts house party too! Awesome! [MH]

I snuck into the Grammy party at the Four Seasons with a buddy on Thursday night.  There were a bunch of platinum-selling bands playing 3 song sets, and the free food was just as amazing. [SJ]

Pandora party. Somehow I forgot to RSVP. I’m not naming any names, but I owe someone a nice steak dinner. [WD]

The photos below are broken into two galleries, so make sure you check out both!