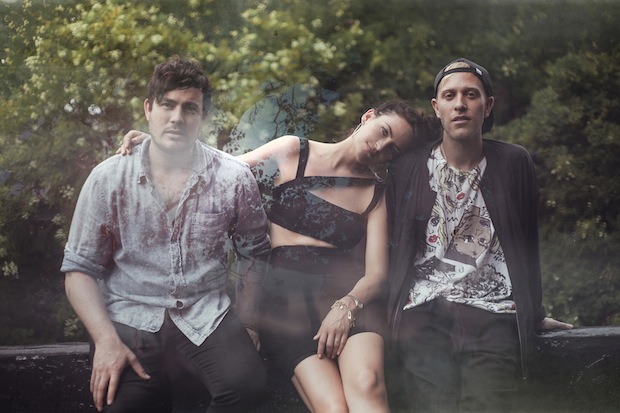 Add Blouse to the list of reasons to gush about Portland, OR. Hot off a week of SXSW, the three piece will perform in Nashville TONIGHT with Dum Dum Girls at Exit / In in support of their critically acclaimed album Imperium. Tickets are still available! Their sophomore record sounds of DIY, experimental-psychedelics that evoke a film reel of Lou Reed and Nico in the afterlife. It’s 10 tracks feel like a vacation you don’t want to end (insert James Franco: “Spring Break FOREVER”). Imperium was produced by band member Jacob Portrait (of Unknown Mortal Orchestra) who explained the record is filled with “instruments that don’t plug into the wall” and released on the Brooklyn, NY stellar indie label, Captured Tracks (Perfect Pussy, DIIV, Wild Nothing). It’s no wonder that Dum Dum Girls (on tour in support of one of 2014’s best albums yet, Too True) scooped them up for opening so we jumped on the opportunity to pick lead singer Charlie Hilton’s brain about Nashville, inspiration, Portlandia and more…

No Country: Have you been to / played Nashville before?

Charlie Hilton: Yes, just once! We played there on a US tour with Bear In Heaven and Doldrums. We had never been there before but we didn’t get to see much. All we had time to do before our show was eat barbecue and watch monster trucks on TV. We’re pretty psyched to be coming back because we actually get to spend an extra night in town.

NC: What are your thoughts about Nashville?

CH: I don’t know it well enough to have any of my own thoughts, but it’s difficult to think of the city without thinking of music.

NC: If you read your reviews, what has been your favorite so far that you feel has truly captured the essence of your artistry on Imperium (if any)?

CH: That has to be Tshepo Mokoena’s review for Noisey (VICE):  “If Nico fronted Galaxie 500 and roped in a synth player for the odd song, it’d sound a little like Blouse.”

NC: Can you share one / any of your favorite fan reactions to your album / live show?

CH: Yes! We played a show in Vancouver BC a few months ago, and a really sweet young guy came up to me and passed me a note. I still have it in my guitar case because it meant so much to me. It reads:

Dear Blouse,
You are wonderful. I wish you did the soundtrack for some Miyazaki film or sailor moon spinoff. I’ve cried, I’ve calmed, I’ve felt elated with your music. You’ve inspired me to write a narrative with the tune “firestarter.” It’s about gay salvagers and dune racers in a desert trade settlement. Keep making my life! <3 John

NC: What can fans anticipate next (following SX and the April tour)?

CH: It’s difficult for me to look too far ahead right now. I’d like to work on new material when I get home. We’ve talked about a third Blouse record but we’re not going to jump into recording right away.

NC: What albums / songs are you all currently into?

CH: We’ve been obsessing over a song called Shinzo No Tobira by the band Mariah. I’ve also been really liking the self titled Anika record.

NC: What lyrics / quotes / words of wisdom have inspired you?

CH: The most recent was “talking about music is like dancing about architecture.” But for real inspiration, I keep a miniature version of Rilke’s “Letters to a Young Poet” in my bag. Those letters are the most incredible artifacts for me. I can’t read them enough.

NC: What are some of your favorite spots in Portland?

NC: Any thoughts on the show Portlandia?

CH: I love it. I heard the new season just started. We’re totally going to watch in the van!