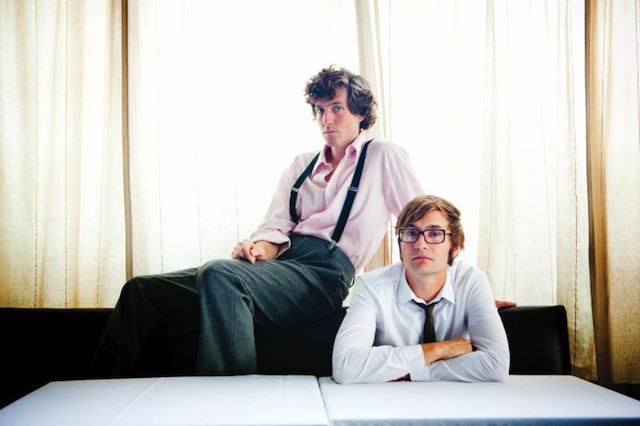 Last time we heard from Yip Deceiver, they dropped a slow-motion, gore-filled trip-fest of a video. Tonight, they’re bringing more funky synth sounds to The High Watt than hyphens in that last sentence. And for only $8!

Yip Deceiver could be called a synth-pop duo, but “Italo-disco without the Italy” hits a little closer to to home. Originally a solo project of multi-instrumentalist Davey Pierce, Nicolas “Dobby” Dobbratz joined after the two met while playing in of Montreal. Now they’re on the road supporting their 11 track debut album, Medallius. This Nashville show comes at a busy crossroads of live dates: between gigs with Turquoise Jeep and Electric Six, and on their way to SXSW.

Instead of creepin’ behind laptops, the duo takes an analog approach to their live show. Expect a tag-team attack with tradeoffs among the mic, keys, and beatbox. “When we get up on stage and sing those songs, we mean it,” Dobby says, “but we’re not afraid to literally laugh at ourselves at the same time. It is a genuine expression of who we are and what we love without taking ourselves too seriously.”

Stream The New Natural Child Record 'Dancin' With Wolves' Before You See Them At Freakin Weekend!