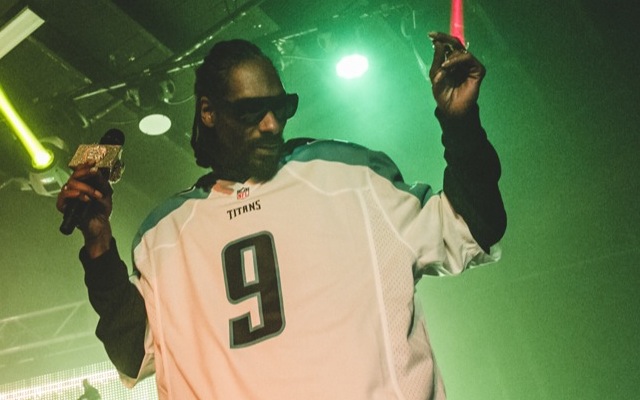 This review was going to start off by establishing how much an OG Snoop Dogg is, but we’ve since come to the realization that this is not a fact that really needs restating. Snoop’s been active in the rap game since the early 90’s, and, by now, just about everyone knows of his status as one of the last truly active voices of that era. Simply by virtue of staying in the circuit this long, the guy’s a legend, but what has really sustained Snoop’s career is a combination of his borderline ridiculous yet lovable persona and the strength of his live show. Thus, it shouldn’t come as a surprise that a Snoop Dogg show at an intimate venue like the Cannery Ballroom with three prominent local supporting DJs (Wick-It the Instigator, Rate, and Coach) sold out very quickly. Luckily, we manage to procure a spot for ourselves and our fantastic photographer Jake Giles Netter, but we really had no ideas of what were getting ourselves into. What follows is the true account of No Country’s perilous journey into the hazy world of the Doggfather.

The evening preceding the Snoop Dogg show were impeccable save for one minuscule but utterly annoying detail: the persistent light rain. There was not enough to cause any sense of panic, or to cancel the show (god forbid), but just enough to be a constant annoyance, in much the same way a particularly tenacious itch can be more irritating than an actual scratch. For the sake of journalism and you readers, we braved the elements, crossed the perilous pass that is 8th Avenue and sauntered across the parking lot of the Cannery. Our spirits were damp yet high as we approached the venue, only to be quickly  dashed at the discovery of literally hundreds of people standing outside. This was the “I printed my tickets at home” line and was composed primarily of excited individuals with suspiciously red eyes chattering to each other about the coming evening. There’s no way the line was less than an hour and a half long, but in a strange reversal of the norm, the will call line was a mere five minutes long. This brought tears of joy to our eyes as we quickly moved through will call enter the venue, only to find….more people.

Now, don’t get us wrong. We’ve been to sold out shows at the Cannery before, but somehow, this felt even more packed than usual. Perhaps they decided to ignore the fire code or something; regardless, the place was crowded, which really added to the atmosphere. After all, there’s no better way to get to know someone than accidentally rubbing bodies together for a couple tunes. Thus it was with that social mentality that the crowd began to get down to the DJ sets put on by three of Nashville’s best local DJs: Wick-It the Instigator, Rate, and Coach. If you don’t recognize some of those names, well, you really should. Jeremy “Coach” Todd aka DJ Coach aka DJ Such Beard has been throwing down over at 12th and Porter for some time now, and he brought his regular energy to the Snoop show. He was joined by longtime collaborator DJ Rate for what turned out to be an above average hip hop set. As in, way above average. These guys killed it, and they sent the crowd (well at least, those of us who were already in there) absolutely bonkers. As professional DJs, it’s literally the job of these two individuals to analyze crowds and determine exactly what is needed to pump people up; based on their performance this evening, it’s clear that this is a skill both of these DJs have more than mastered.

One of the most gratifying parts of the Snoop show was the virtual lack of set breaks. Because of the relative little amount of equipment used for DJs and rappers, it was possible for their to be an essentially nonstop flow of live music and momentum throughout the evening. This kept the crowd in full on party mode all night, which we assure you is most certainly a good thing. In this vein, Wick-It the Instigator managed to further the good vibes of the evening with his masterful rap/electronic music. Wick-It spun a number of rap classics, all of which were designed to hype up the crowd, making his set more energetic and exciting people about the upcoming headliner. While most of the crowd may not have recognized these intents, they certainly worked: Wick-It managed to get the entire audience bumping and jumping through the duration of his set. It should be noted that by this point, the room had pretty much reached capacity, yet Wick-It handled the massive crowd like he was dealt with such a thing all the time (probably because he does). As his set built to an energetic conclusion, it became obvious that Wick-It has a level of competence over EDM that few other DJs have. He’s been one of the fastest growing DJs to come out of Music City these last few years, and it’s pretty obvious why. Hint: it’s cause he absolutely kills it live.

Wick-It handed the set off to Daz Dillinger, who many of you may not recognize as the DJ and extremely important influence to Snoop Dogg. In fact, in many ways Daz might have been more responsible for establishing the dominance of the G-Funk sound than Snoop or Dre. That may be a pretty controversial point, but we’re sure everyone can agree that no one backs up the D O double G like Daz. After about 20 minutes or so of DJing (and about ten minutes of calling out “ya’ll ready for Snoop Dogg?!”), the man himself ambled up on to stage, clad in only the finest of Titan’s apparel and loosely clutching his signature blinged out mic.

At this point in a regular No Country review, we typically like to lavishly praise the headliner with bold phrases like “genre-defining sound” or “enticingly satisfying cadence,” but truthfully phrases like these fall short when describing the genius that is Snoop Dogg. Let’s just  say this: somehow, all that weed Snoop smokes seems not to have impaired his live show too much. Even at 42 years of age, the man’s flow is still on point, and he seems just as comfortable and relaxed on stage now as he might have fifteen years ago. It’s incredibly obvious when you watch Snoop perform that he feels at home on the stage; unlike many other rap acts, Snoop is obviously enjoying the whole thing in the most honest way possible, and doesn’t seem phased by the crowd of rabid fans demanding he perform as best as humanly possible. In short, Snoop Dogg was there to have fun and dance a little bit, and he succeeded in doing just that while more than 1,000 people aptly followed his every move. It definitely helped that he played only classics like “The Next Episode” or “Drop It Like Its Hot”, but even if he had played some of his more recent hits under his new monikers, the show still would have been great. That’s just what Snoop does, and what he’s been doing for more than 20 years now. He plays great shows, and we don’t think anyone would disagree that this show was anything but just that: great.

Tegan and Sara to Play Marathon Music Works May 12