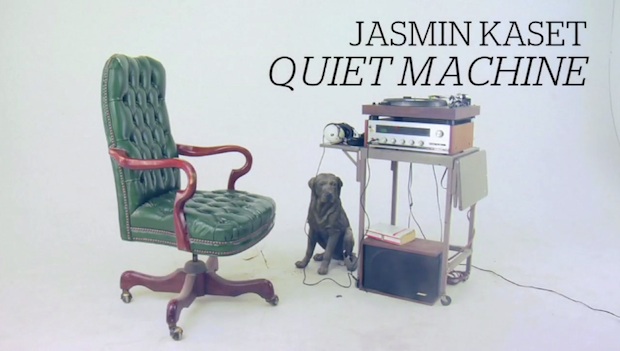 “Don’t EVER go to the bathroom! I’ve never seen so many people in here before,” said a local Nashvillian in response to the crowd at The Basement celebrating the release of Jasmin Kaset’s Quiet Machine with Ponychase and Rayland Baxter. It was one of those nights that turned humans into sardines for good reason…

Ponychase opened the evening, continuing to deliver endless reasons to love them. Sonically, their music projects the feeling of lucid dreaming, a state in which psychology tells us can be used to explore the boundaries of self-realization and the limits of the universe. The fortunate tightly packed audience received a listening party preview of the band’s upcoming debut LP, Parade Of Youth, out March 4. “We’re mostly playing songs off our brand new record that will be available here on March 7 (their album release party),” said lead singer and songwriter Jordan Caress. When she isn’t busy serving up lattes and good vibes at Portland Brew East, she makes organic and effortlessly hip synth pop with her brother Adam (keys), EG Cameron (bass) and Brian Siskind (electronic drummer / co-producer of Caress’ 2008 EP).

“It’s getting close to my bed time,” she said mid-set. “That’s not rock n’ roll at all” she and her brother agreed. But Ponychase isn’t a rock n’ roll entity and they don’t need to be. Their music is a passage to reverie, a liberation from the crippling stress of reality and we happily fall under the spell of their Vanilla Sky.

It’s not just their sound that evokes escapism, it’s in their lyrics as well. The highlight of the night came during the title track. Caress sang, “All alone we sit in our homes / Writing music and books while thousands are working / tirelessly so the weak can be free / Oh, to have some real use / Oh, to be, oh, to be something”

Jasmin Kaset took the stage next and the feeling of the room’s love and appreciation of her was palpable. Her live production included keys, bass, cello, violin (who has played with the Smashing Pumpkins), mandolin and drums. Kaset’s eyes stared into to the stage lights frequently, showcasing an endearing vulnerability, a refreshing feeling considering the ballsy confidence Birdcloud radiates. It brought her lyrics, “I just wanna gang up my eyes” to fruition.

Kaset’s music has the genius of Juno’s soundtrack in it’s threads with perfect one liners like “All of this bein’ good don’t suit me” and a possible Neko Case trajectory. “Quiet Machine” was the standout performance of the night and a pink haired Marilyn persuaded a shot out of Kaset following, who decided to shoot “the best tequila they have.”

The night took a daker turn for the better with “Maria” , a song Kaset revealed that she wrote with Jordan Lehning about a Russian hooker. “Bangalore” was a beautiful highlight of the evening with lyrics “Caroline forgive me /  I suspect you always knew / I cannot love you as much the stars.” She left her Quiet Machine celebrating crowd suspended in happiness and humbleness in pure appreciation.

“Does anybody have a capo?” Rayland Baxter asked the crowd as he settle in on stage. Part of the beauty of this town is that the request was met easily and within seconds. Though Nashville is no stranger to the silky southern croon of Baxter, we had gotten used to seeing him sitting behind his pedal steel, so it felt anew to see the tall and charming man standing with guitar in hand.

“We’re just shaking the cobb webs off” he said after performing “Willow.” A hush came over the room during “Dreamin” and the crowd yelled “thank you so much” when the song was finished. There was no question that he deserved it. Baxter has the kind of soothing melodies that lull, the last voice you want to hear every night before you drift into sleep.

“I started playing music in Creede, CO on open mic night” he revealed while introducing his visiting family in attendance on side stage. The history made for a perfect fit, a gem artist getting his start in a mountain town known for its valuable minerals. He shared that he and his band had just practiced the new songs the night before and jumped into the haunting and sexy blues of “Bad Things” off of his five-song EP, ashkeLon.

“We’ve got one more song then let’s celebrate the weekend” he said before playing “Young Man.”
“It’s about about all of us,” he shared, “the wandering spirits in us all. It’s fun to peace out of town and make impulse decisions.”