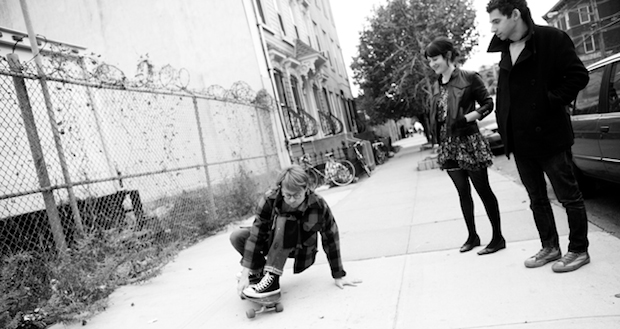 The Stone Fox has been doing a great job booking shows in the very short time since their opening, and we’ve had February 20th marked ever since they announced Hospitality would be playing. This solid bill also includes fellow Brooklyn pop stand outs Air Waves and local surf pop start ups, The Beech Benders. We run through each of the bands below, and give you a chance to snag a free pair of tickets too!

Heads up this one gets started a bit earlier than usual, so get there by 8pm for the start of the music.

In modern “buzz” music, female fronted throwback pop seems to be a safe bet. From the explosion of Haim onto the scene last year to the exuberance of Chvrches, it’s as though we can’t get enough of this poppy fun. I’d have to give the nod to Hospitality for helping to start this trend. From their incredible 2008 self-titled EP, they have continued to hone their craft, and continue climbing the internet buzz-o-meter. Their newest effort, Trouble, just released on Merge Records, and the first single, “I Miss Your Bones” has gotten plenty of airplay around here already.

We started this rag a few years ago to learn about new bands, and Air Waves was new to us until we spent some time jamming out to them over the weekend. The Brooklyn based pop-sters bring a mixture of bubblegum pop tambor over jangly guitars (ala Thao & The Get Down Stay Down).

Praise for Nashville’s The Beech Benders has been on the rise in recent months. The straight-out-of-a-Tarantino-movie surf pop is spectacularly fun. Make sure you get out early enough to check them out, because this is going to be a perfectly paired bill.

Must be 18+ to enter, per the show’s age requirements. The winner will be announced Wednesday Feb. 19 at noon, and will receive a pair of tickets. For a bonus chance to win, RSVP to the event here, and share it on your Facebook wall. Enter below (you will be redirected to your e-mail, where you will need to hit send):

If you’re having issues with the above form, you can alternately send your full name in an e-mail to [email protected] with “Hospitality Giveaway” in the subject line, and please let us know if you shared on Facebook.

Hospitality, Air Waves, and The Beech Benders will perform February 20th at The Stone Fox. The show is 18+, begins at 8pm (doors at 5pm), and tickets are available to purchase for $8.