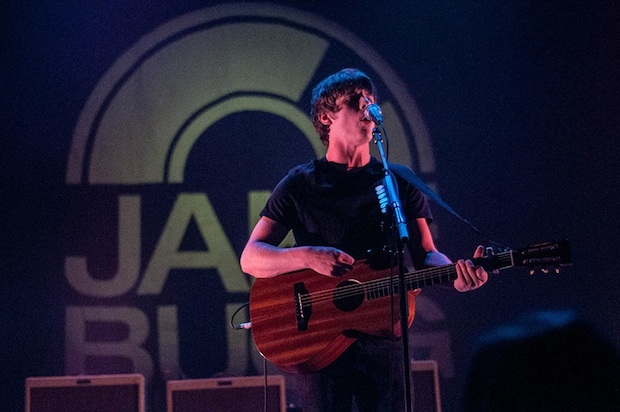 It was a SOLD OUT show at the Ryman on a Saturday night and people were walking on the pews and getting their dance ‘n clap on. Read on for our full review of the evening with photography from Amber Davis…

Janelle Monae’s recent Mother Church performance lingered in the air as The Skins took the stage as the evening’s opener. Though it was the final show of the tour, Brooklyn’s own played their Nashville debut with shear intensity as if it were the beginning. The band (ranging ages 15-21) had promised, “We’re going to end this tour with a BANG! BANG!” and they delivered, dressed to kill. With a voodoo of high-energy, bouncy bass, spiral guitar solos, jamming drum beats and lead singer Bayli vocally using the microphone as a whip, the band enticed, calling the spirits of Bonnaroo 2013’s Rock n’ Soul Dance Party Superjam forth.

The Skins are the kind of band that flourish live, shimmering with musicianship that feeds off of crowd energy. In our feature with the band, we told you that they fit the bill for the music festival circuit and are a band we’ll likely be seeing a lot more of. We are in need of seeing a lot more of them actually, they fill a void of modern Afro Rock for the masses. Bruno Mars, Miguel and VV Brown are three different examples of popular modern R&B / Soul but when we talk about the sweat of Rock n’ Roll with African American leads in the mainstream, it’s lacking. Alabama Shakes, Gary Clark Jr., and TV on the Radio give us hope…

Hype singer Bayli Mckeithan glided across the stage with Robyn-esque “Call Your Girlfriend” dance moves, blending with the powerful, culminating experience of the band. Kaya Mckeithan bumped bass with Beyonce’s “Flawless” fierceness while Daisy Spencer and Russell Chell traded impressive guitar solos and Reef Mckeithan threw down drum beats that made it obvious why Chad Smith (drummer of Red Hot Chili Peppers) was recently photographed wearing one of the band’s t-shirts. “Sweet, tasty licks!” said Bayli to the happy crowd, “We love that. We do love that.” They ended their set on a high with their song “Summertime” with a promise to return.

Nashville’s The Weeks took the stage next, showing their gratitude for the famed stage before they jumped into their set. “This is amazing,” lead singer Cyle Barnes said, “We are so excited to be here. We really hope you enjoy it in the church here.” They started with “King-Size Death Bed” and the audience swayed from the start to a set of their upbeat southern shores rock. The crowd wailed as the coonskin cap and bandana embellished guys performed “Brother in the Night.”  Their set featured an appearance from singer-songwriter / Billy Reid stylist Shelly Colvin, songs from Dear Bo Jackson (#7 in our Best Nashville Albums Of 2013), and sent waves into the unsuspecting crowd when guitar player Sam Williams and Cyle pecked lips, ending the set on “Buttons” with lyrics “she kissed my lips and quickly ran away.”

It was the moment of the night the room had been waiting for…Jake Bugg. He made his entrance from the audience’s right side of the stage, walking behind amps in the shadows and through them to settle in up and center. He struck his guitar strings like matches and without a word, jumped straight into “There’s A Beast And We All Feed It.” Immediately, we felt the truth of what Kim Logan had told us about parallels to The Beatles and his “incredible element of artistic genius that completely transcends the heartthrob phenomenon.”

“There’s a beast eating every bit of beauty” he crooned, “And yes we all feed it.”

Some men were chanting USA! USA! after “Trouble Town” and Bugg went straight into “Seen It All” , a song that tells the story of a stabbing. “After tonight, I’ve seen the light” he sang, “but not the kind I would have liked.” The crowd cheered and it was then that he spoke his first words of the evening to the audience, a thank you in an English voice much deeper than the eyes would assume. He romanced with “Me And You” singing, “I’ll hold you with such delicacy, no they won’t catch you and me.”

He walked about the stage radiating confidence with his guitar in hand. “I wrote this song here in Nashville last year” he said of “Storm Passes Away” and a warm sense of pride swept over the room with undivided attention until its finish. There was a perfect transition into “Two Fingers” and The Mother Church choir joined in while toasting. “So I hold two fingers up to yesterday” everyone sang, “Light a cigarette and smoke it all away / I got out, I got out / I’m alive and I’m here to stay”

During “Broken” you could hear a pin drop and the audience took to their feet for a well-deserved standing ovation. “Slumville Sunrise” and “What Doesn’t Kill You” showcased his rockabilly punk side and talent on guitar. He was bold and in control with the pure essence of a what a modern popular rockstar could be. “A Song About Love” inspired a male audience member to yell out “Jake Bugg, we love you” right before he performed a chilling cover of Neil Young’s “My My, Hey Hey (Out Of The Blue).” The Mother Church choir joined once again and shouted “Rock ‘n Roll will never die” with another standing ovation. Bugg thanked the crowd for the headlining show and wrapped the night with “Lightning Bolt,” a perfectly named ending to an electrifying set that was one for the books.