[INTERVIEW] The Skins to Play The Ryman with Jake Bugg & The Weeks Sat. 2/1 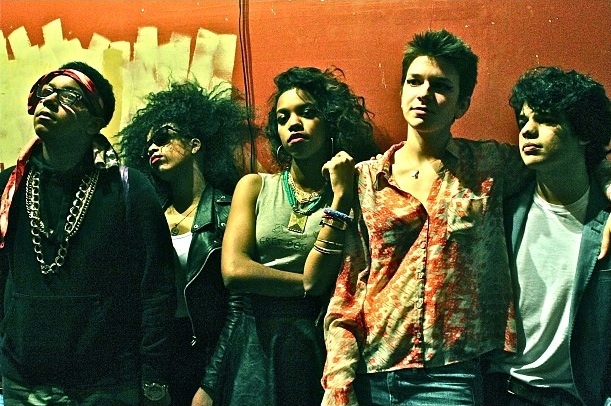 We headed down to Legends on Broadway to ol’ Fortune Teller Willie Nelson and he told us “The Skins are about to blow the F up.”

Since forming in 2012,  Brooklyn, NY’s The Skins have played two sold out tours supporting UK band The Heavy and have crushed at Afropunk Fest, CMJ & SXSW. They’re the kind of band you could stumble upon at Bonnaroo and leave with your mind exploded to pieces. With Rick Rubin (Producer of Rage Against The Machine, Kanye West, Lana Del Rey +more and founder of Def Jam Records) on board, an EP with Adrian Grenier (Entourage) at his home studio Wreckroom under their belt and envy-worthy opportunities left and right, they are most definitely a band on the rise! Oh and by the way, their ages range 15-21! Amidst an opening tour for Jake Bugg that will stop at the Ryman this Saturday with The Weeks, the band took time out to talk about Rick Rubin, Yeezus, the music industry, Nashville and some of Brooklyn’s hottest spots. Read on after the jump and keep an eye out for our live review + photo gallery following the show…

The sonics of The Skins are refreshingly ageless and forward traveling. The chemistry of the band is channeled with the family dynamic of Mckeithan siblings Bayli (vox), Kaya (bass) and Reef (drums) plus the addition of former School Of Rock guitar instructor (it shows and it’s a good thing!) Russell Chell and stellar guitar player Daisy Spencer. Together, they are fearless and confident electric ladies and gentlemen, each with distinct qualities that root to a fierce, acceptive sound.

There’s Bayli who pipes feisty, soulful spirit and is a visual of M.I.A meets Solange, Kaya who can slap bass lines that sip like Buddy Guy’s Sweet Tea and Funkadelic’s Maggot Brain, badass shredding guitars with bursts of Prince & Jimmy Page from Russell and Daisy and impressive funk / hard rocking r&b beats from Reef (manifest Reef vs. ?uestlove drum off??) that all join to create foxy rock. Not to mention, their edgy look is NYLON / Vibe / Urban Outfitters..they’re the kind of band you want to go shopping with.

So bump their discography (keep an ear out for “Black Spin Head”) and get pumped for your Saturday night coming up at the Ryman with The Skins, The Weeks & Jake Bugg (starts @ 8 p.m.) while you read on with Bayli…

NCFNN: Have you been to Nashville before?
Bayli: We haven’t! This will be our first time.

NC: What are your thoughts about Nashville & the Ryman?
B: We’ve heard legendary things about the Ryman, which makes us even more pumped to play! And of course, Nashville has been a city we’ve been waiting to visit for the obvious reason that it’s Nashville; home of some of the greatest and most iconic artists to ever live.

NC: How has your experience in the music industry been so far? Did you envision it to be a certain way and what has surprised you?
B: We are still very fresh into the music industry so we probably haven’t had a chance to experience it in full effect quite yet, but what we have seen of it is surprising, cool and inspiring. Frankly, we’ve been told so many horrible things about the music industry that we entered with this negative vision of it…we’ve been lucky enough to have an awesome, supportive team and have so far gotten the chance to work with incredibly genuine individuals. I guess we’re just lucky.

NC: How has your experience with Rick Rubin been?
B: There are too many great things to say about Rick, so we’ll keep it brief. Working with Rick has been inspiring to us in a lot of different ways. Way past just music and creation, but on a personal level as well. It’s been a dream getting to hang with that guy and I know we are all excited for the day that we get to go even deeper with him.

NC: What is it like to be playing to sold out show crowds?
B: It feels amazing to play a room full of beautiful screaming faces. While we are very grateful that we are given opportunities like these, I’m sure it’ll feel even better when we get a chance to play to a sold out crowd of our very own fans who know and cherish the music just as much as we do.

NC: What musicians / writers / artists have inspired the band?
B: There are literally too many artists to list all of them but some of our main inspirations are Janes Addiction, Led Zeppelin, Amy Winehouse, Earth, Wind and Fire, Beyoncé, Missy Elliot, Lauryn Hill, Badu, Deep Purple, Aretha Franklin, Michael Jackson and the list goes on and on.

NC: What albums / songs are you all currently into?
B: We’ve been listening to a lot of Haim’s new album “Days Are Gone”, some Lianne La Havas and Janelle Monae, a lot of hair metal (i.e. Def Leppard, White Lion, etc.) and we’ve been into Yeezus [side note: they do a sick cover of Kanye West’s “Mercy”] and a lot of 90’s east coast hip-hop (i.e. Biggie, Lox, Wu-Tang, Jay-Z) with of course classics sprinkled in like The Supremes, Gladys Knight and The Pips, Otis Redding, etc.

NC: Any advice for young and aspiring musicians / writers / artists?
B: We’re still figuring everything out ourselves but I guess some general advice we’d love to give is to stay true to yourself and your sound but be open-minded at the same time. If you are an aspiring artist, you better be working really hard because this is the most low-down competitive industry out here.

NC: Any insight into an upcoming release?
B: We don’t have any dates yet but we are looking to put out an EP in the coming months, hopefully by the summer time.

NC: What are some of your favorite spots in Brooklyn?
B: We don’t know where to begin! There are so many cool spots in Brooklyn. In terms of food, spots like Sea, Outpost cafe, Speedy Romeo’s and Not Ray’s Pizza are pretty delicious.  Prospect park is the coolest, prettiest park ever. There are some awesome venues like Brooklyn Bowl, Shea Stadium and this place that has recently been shut down called Southpaw.

The Skins, Jake Bugg, and The Weeks will perform Saturday, Feb. 1 at The Ryman Auditorium. The show will begin at at  8 p.m. (doors at 7 p.m.) and tickets are available for $27.