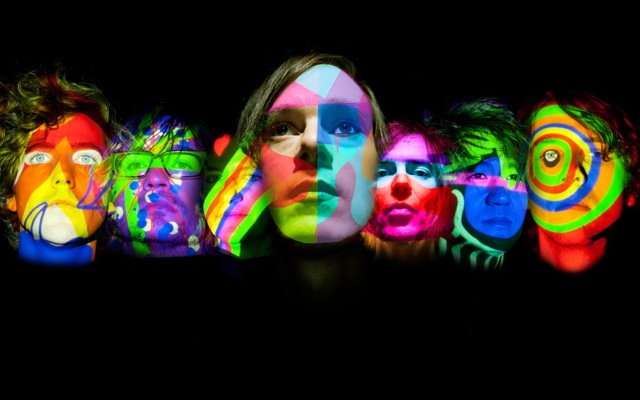 From a writer’s perspective, Of Montreal is bit of a doozy to adequately describe. Their upbeat tunes are undeniably catchy and overly dancariffic, but at the same time, Of Montreal is like absolutely nothing you’ve ever heard before. In fact, Of Montreal so much breaks the mold that us writers are forced to invent silly adjectives such as dancariffic just to attempt to describe their music. Fortunately, this stellar band will be in town tonight, January 15th, at Mercy Lounge, giving readers a fantastic opportunity to hear this music on your own, and to make up some of your own ridiculous adjectives to describe Of Montreal. Seriously, we’d love to hear some of the words you guys can come up with to describe this band. The show starts at 9 pm (doors at 8 pm) with Wild Moccasins. The female fronted indie quintet is the perfect opener for Of Montreal; their poppy, Submarines-esque tunes are sure to infect the audience with a bad case of dance fever. Sound good to you? Then you’re in luck, as tickets are still available for $15 so long as you’re over 18.

At first listen, Wild Moccasins sounds like what would happen if you extracted the very best elements of Moon Taxi, Camera Obscura, and maybe even some Starfucker. The Houston natives have the soaring melodies and subtle harmonies, hypnotically repetitive guitar lines, and all around fun vibes that are a staple in any successful live performance. That, however, is just at first listen. It turns out that Wild Moccasins is one of those bands where the more you hear their music, the more the subtleties begin to delight you. As you grow accustomed to their sound, you’ll start to pick up on the intricacies that really make this band work. Wild Moccasins might not be a household name, but they’ve been steadily working they way up, and a couple listens to their top tracks makes it quite evident why.

We recently heard Of Montreal’s live show described as an “electro-jam”, and there’s really no better way to put it (well, other than dancariffic). Their wild music borders on all kinds of genres, but manages to avoid falling too hard into any particular label or sound. This makes the music sound fresh and unique years after its release; for instance, we’ve been jamming to their full length The Sundlandic Twins on a regular basis since its release back in 2005. Of Montreal is known to deliver their same eclectic, good natured attitude live, which basically guarantees this one to be a fun, if sweaty, evening.