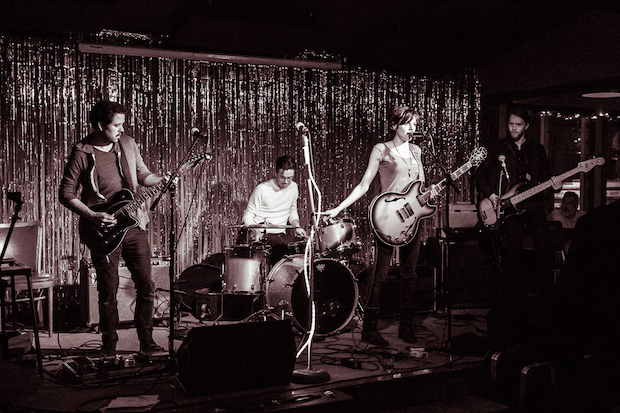 Kate Tucker & The Sons of Sweden. Photo by Shawn Jackson.

First off we want to thank everyone that came out and all of the artists that led us in song at The Stone Fox.  We saw a little bit of everything last Thursday that truly exemplified the range of artists that make running this site so much fun.  From traditional acapella carols to full on punk rock slug fests, we spanned genres and created a lot of smiles and holiday cheer amongst the fans.

We have a very quick run through and a few great photos of some select artists from Shawn Jackson below.  Again, we here at No Country thank you all for your continued support, and look forward to getting to know more of you in 2014.

From the start, Pretty Ugly, made it clear that even a traditional stripped down version of “Blue Christmas” is something cool enough to leave music fans in other cities longing.  Sherbert took the reigns to initiate the punk rock with “Merry Christmas, I Don’t Want To Fight” by the Ramones.  All Them Witches took us for a turn when the usually hard hitting blues rockers performed “Do You Hear What I Hear?” in a completely stripped down instrumental version consisting of nothing more than a guitar, stand up bass, and violin.  Thelma & The Sleaze brought the first full fledged punk rock extravaganza of the night by forgetting half the lyrics and just trash rocking their way through “Hard Candy Christmas”.  Kate Tucker & The Sons Of Sweden brought the first indie rock interpretation with their soaring, ethereal version of the classic “Little Drummer Boy”, and made most of the audience realize they are going to be a band to watch in 2014.  Josh “Foster” Farrow (that’s a joke for those of you there) took the stage to bring us a very soulful version of “Merry Christmas Baby” that had the chatter going for the rest of the night.  Waterfall Wash gave a repeat performance of holiday favorite “Have Yourself A Merry Little Christmas”, and Heidi Feek and Austin Manuel provided the first giggles of forgotten lyrics with a lovely rendition of “Baby, It’s Cold Outside.”  One of our new discoveries, Cotton Wine, performed a lovely acapella duet rendition of Silent Night.  Luella (of Luella & The Sun) silenced the entire room as she took the stage for a sparce, lovely, and soaring version of “Oh Holy Night”.  With “pretty” out of the way, it was time for the party to begin as Tesla Rossa performed a spirited version of “Christmas Time Is Here”, and then backed up Brandon Jazz when he coaxed the crowd to sit down and then crowd surfed on them to get them back up during “I Wish It Was Christmas Today”.  El El finally got the crowd singing with an incredible sing along version of “I’ll Be Home For Christmas.”  Magnolia Sons closed out the night with their full band versions of their two original holiday songs “My Favorite Season” and “The Christmas Joy.”

If you were there, you know that these simple sentences don’t do justice to the level of fun that night.  If you weren’t there, this definitely doesn’t do justice of how cool of an experience it was.  More fun times to come, thanks again to everyone, and a safe and happy holidays to all  of you.

3. All The Witches. Photo by Shawn Jackson.