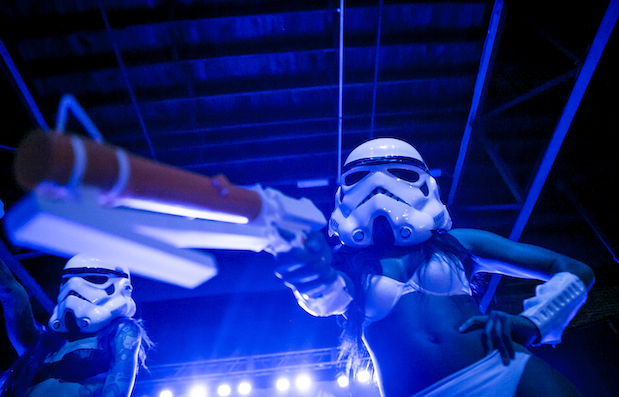 Lucky for us, we were able to squeeze right up to the very front and center for the SuicideGirls Blackheart Burlesque show at Marathon Music Works this past Wednesday. Eye fucking candy.

We’ll keep this brief, because we both know the most important part is the photo gallery. Below, you’ll find a quick review and the most delicious photos from Jake Giles Netter.

The night started off with Nashville’s own Music City Burlesque favorites Freya West, Lux-O-Matic, and Shan de Leers. Though these performances were more traditional (as opposed to the SuicideGirls choreography-driven routines) we gotta hand it to our ladies from MCB—they never fail to represent. Undoubtedly, our favorite moment was when Shan de Leers, donning a Wonder Woman outfit and assless shorts, hypotizingly windmilled her ass tassels rount and rount, as if winding up the audience before the SuicideGirls took the stage.

The audience setup was a little odd: those seated and those standing were divided down the middle of the venue. It looked like there were more people sitting than standing, creating imbalance—like, the small crowd on the left were superfans, and the seated side was indifferent. But seating definitely made sense for a show like this, because short people could potentially go the entire show without seeing one boob.

To give a recap, SuicideGirls worked with renowned choreographer Manwe Sauls-Addison (i.e. Lady Gaga, Beyonce, and J.Lo). He crafted a series of routines that was more or less a loose ode to pop culture. There were routines from The Big Lebowski, The Fifth Element, Kill Bill, Star Wars, Planet of the Apes, as well as others. Some dances were pretty representational of the movies themselves, as in the Kill Bill sword fight routine; others were just stripteases where the costume was the only element that resembled the movie; some were playful, as in the Planet of the Apes number when a pair of gorilla-masked dancers gyrated around the stage. Either way, how do you not enjoy sexy, tattooed women working their jiggly bits in your face? We definitely did. So did the chick in the front row who could barely contain herself—screaming about how “fucking sexy” Bambu (who we interviewed earlier) was, spilling her tallboy all over the front of the stage, and periodically hiking her knee up as if she was going to tackle one of the dancers in a fit of sexual desire. We pretty much loved every minute of that show as we did the actual show.

Our only complaints: the three people that volunteered themselves onstage to take off their clothes with the girls should have gotten more naked… minus the dude who went all the way down to his boxers (we were all worried his dick would pop out); thanks to Tennessee Law, we were robbed of underboob; there weren’t nearly enough motorboats; and we wanted more cake thrown in our mouths, not chucked into the air.