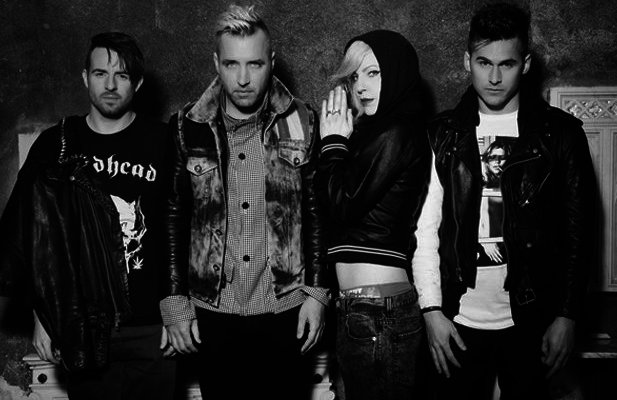 We recently caught up with Anna Worstell, frontwoman of Nashville electro-punk outfit Five Knives, before the band took the stage for a late night set at Marathon Music Works. It was 11pm and drinks were flowing, so we kept this one short and sweet. After the jump, check out Five Questions with Five Knives!

NCFNN: How did Five Knives first get started?
AW: Zach [Hall, keyboards] and Nathan [Barlowe, keyboards and guitar] were both songwriting partners, and had started making beats. I was in another band at the time, and they called me to come sing on a track. We really didn’t have a plan to be a band, but the songs we recorded were so cool. We posted them online, and people went apeshit, so we just decided to start a band.

No Country For New Nashville: You guys have really been carving out your own niche sound-wise. How do you feel about the current music scene in Nashville?
Anna Worstell: I think it’s been to our advantage a bit, being one of the only electronic bands in town. I think the electronic scene is growing, but we weaved our way in at the right time.

NCFNN: People call your style electro-punk, dance rock, EDM…. how would you describe it? What do you listen to and pull from, when thinking about Five Knives?
AW: Electropunktronica with a hip hop flair? I just think that we’re basically dark, electronic pop. There are so many different influences. Every single one of us in this band is completely different. I love the Beastie Boys and stuff from that era. Zach’s all about 2 Chainz and Lil’ Wayne and that kind of thing. Nathan’s old school, like Depeche Mode and Ramones, and Shane [Wise, drums] is full-on metal. We used to describe it as if Nine Inch Nails and M.I.A. collaborated together.

NCFNN: This summer you took part in the entire Vans Warped Tour. What was that experience like?
AW: To sum it up, it was incredible. It was kind of like church camp with a lot of booze. You make family, keep in touch with everybody. You’re with everyone, all up in their business for forty days.

NCFNN: What’s next for Five Knives, are you still planning a full-length?
AW: Yeah, we’re in the process of writing it right now. We have plans for it to be out early next year. I don’t know if that means February or March, but definitely early. I’m so excited about this new album. It’s going to be life-changing for us. We’re doing little one-offs here and there, but the main goal is to get this record done.

We’ll keep you updated as more information about Five Knives’ upcoming full-length develops. Check out the group’s brand new video for “The Future,” below.