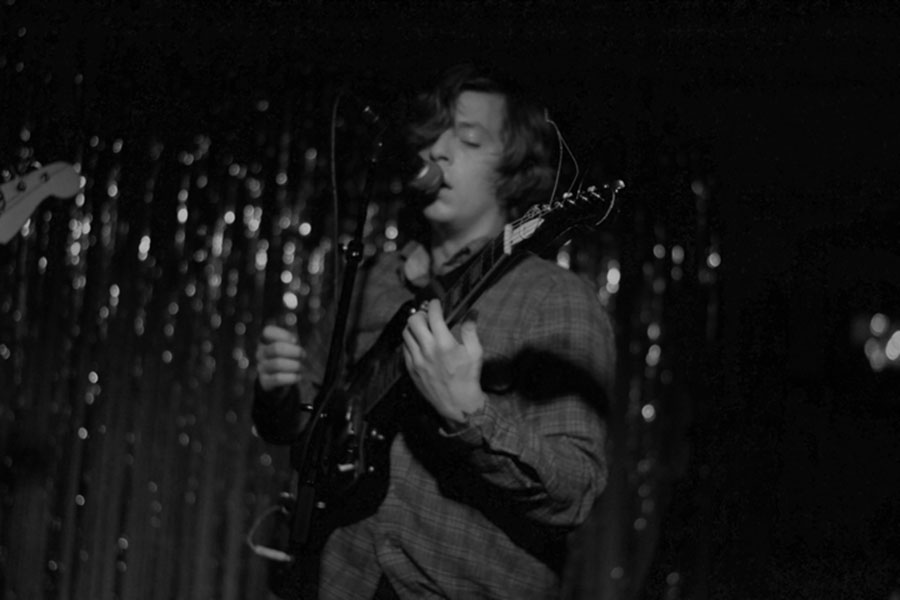 Psychedelic, drugged-surf rock with several twist and turns and a mysterious box – sums up Tuesday night at The Stone Fox with Megajoos, Gunther Doug, and Wooden Indian Burial Ground. Never have I been to a show where I was nodding my head to catchy psych melodies and, in a split second, completely entranced by the experimental guitar Wooden Indian Burial Ground had up their sleeve.

See what we mean along with photos by Megan Keelan that perfectly captured the night.

The lights dimmed as the two-piece band with no guitar, Megajoos, stepped on stage. The lead singer and bass player sported a “Tennessee Scum,” t-shirt along with a blonde headed monkey mask that could easily scare any child under the age of 10, while the drummer wore some orange “Ninja Turtle” eye wear. Their distorted bass and chaotic drums, reminded us of our hometown heroes – JEFF the Brotherhood with their silly lyrics and psychedelic sound. Monkey see, monkey do?

Next up, who seems to be an overnight hit in Nashville, was Gunther Doug. These three guys just love to have a good time and make the most out of their performance. The audience was full of their close friends, which gave the night the intimacy of a house show. Gunther Doug manages to capture that underground punk/garage jam band vibe and throws it into the audiences faces. Even with the crowd full of their friends, we could tell the audience needed to be a bit more rowdy for a real Gunther Doug show to shine. Their set seemed short, but that just left us and the crowd wanting more.

Last on the bill was Wooden Indian Burial Ground, who did not come on quietly. The guitarist and lead singer, opened up a small box placed in front. The insides of the box appeared to have 20 knobs hooked up to his guitar. He started to twist five of the knobs which made his guitar screech with high frequencies, grabbing everyone’s attention at The Stone Fox for a full minute of ear-piercing noise, before they started. Wooden Indian Burial Ground perfectly combines drugged-surf rock, psychedelics and experimental guitar.

Before going to the show we listened to WIBG’s new EP Problems Tour, which is fast paced with crazy guitar effects. However, their live set was nothing like their recordings, it was amplified by 10. The guitarist proceeded to twist several knobs at once making his guitar wail like nothing I’ve ever heard of before. The group of friends from Gunther Doug rushed up to the front of the stage when the music intensified and started to create a seven person mosh pit along with a three second crowd surf. Hilarious at first, but it was clear that Wooden Indian Burial Ground did not see this as a joke.  They possessed a chemistry with the crowd that had the room rolling to their rock.