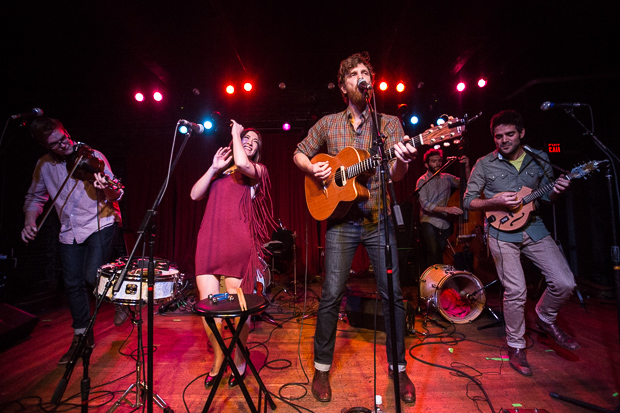 Sometimes we get perks that go along with our job, and the November 21 show at Mercy Lounge was one such night. We were brought backstage to meet the night’s performers, Humming House, The Farewell Drifters, and Jill Andrews. We had the treat of hearing Jill Andrews run through a song with her impromptu band mates from Humming House. There was a magical moment of harmony when everyone else in the room suddenly stopped talking and looked at each other. Zach Bevill, lead singer with The Farewell Drifters, said with a huge grin on his face, “I really love her.”

The rest of the night proved to be a non-stop display of outstanding musicianship, songwriting, energy, and harmony that fans have come to expect from these three acts. Read on after the jump for more about the show and lots of photos. 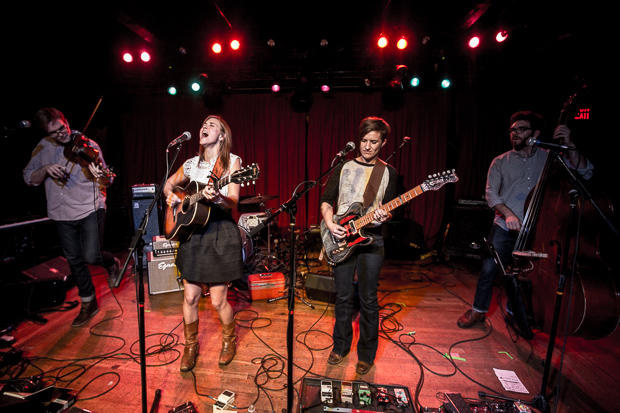 Jill Andrews started off the night with her guitarist as well as the fiddler and bassist from Humming House. If you didn’t see the two guys on stage again later, you’d swear they were permanent installations in her band. The guitarist was a perfect fit as well, providing melodic and restrained yet devastating solos on the telecaster as well as harmony vocals. Her romantic and sincere songs were a perfect match to go with her pretty voice. The large crowd was minding the “Nashville gap,” staying several feet back from the stage, until Jill Andrews politely asked them to come forward. She ended her set on a strong note with a new song “Free.” 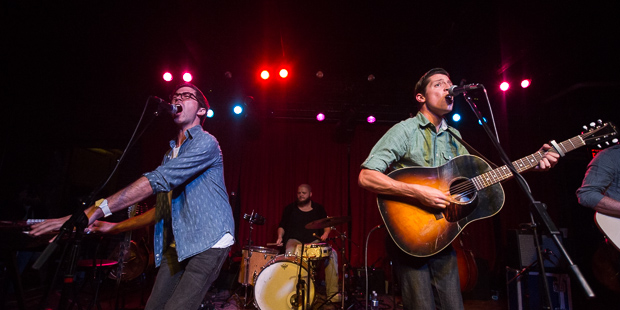 The Farewell Drifters took the stage next with the addition of a drummer since we last saw them. They have always had a lot of energy on stage, but the drums add even more drive to the songs, accentuating the rock side of the band’s folk-rock catalog. They upped the ante for the night on harmonization with sometimes 4-part harmonies. However, it was noteworthy how well lead singer Zach Bevill’s voice pairs with Josh Britt’s in their 2-part harmonies. Between the honesty in their songwriting and the stories they share between songs, the crowd gets to know the band members quite well. In fact, sometimes we wondered whether they intentionally prolong the tuning breaks between songs just so they can continue the banter with the audience, which was very funny and endearing. 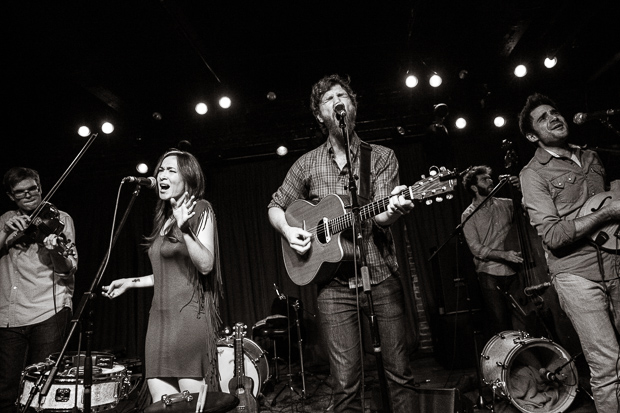 Humming House closed the night, upping the ante once again with their 5-part harmony vocals. They have so much fun on stage that it’s impossible not to smile while watching them. That and the uptempo, full-sounding, and fun songs make it a great show. The fiddle adds an exciting Irish feel to some songs, and it’s difficult not to compare Leslie Rodriguez’s stunning vocals to those of Patsy Cline, especially given their spot-on rendition of “Crazy.”

It was a great night to be at the Mercy Lounge. We recommend keeping an eye on all these locally-based acts because with this level of talent, you’ll be glad to say you knew them when…