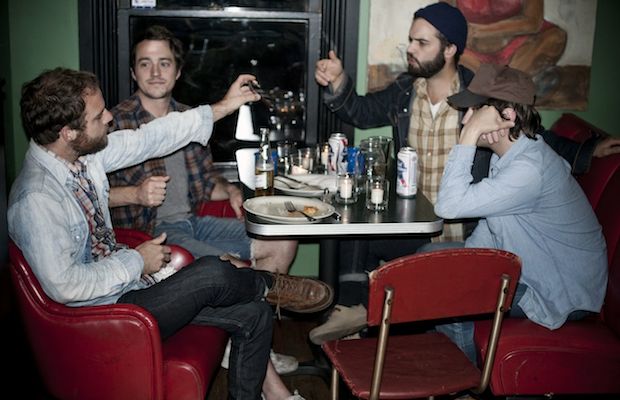 Though they now reside in Portland, and before that called California home, folk rockers Quiet Life will, to me, always be a little band from New London, Connecticut. I first had the pleasure of meeting them sometime around 2005 in Virginia, where I was booking shows and they were just getting started with tiny tours of the east coast. The guys came back time and time again, but, between time and geography, it’s been many years since I’ve had a chance to see them play. I can’t tell you much about Quiet Life now, but I can tell you that Quiet life then were one of the best, most genuine, kindest, and most driven bands I had ever crossed paths with, and, night after night, city after city, never put on anything less than a spectacular live show. A lot has happened since. Between several full-length releases (their latest, Wild Pack, just last month), tours with the likes of Alabama Shakes, Dr. Dog, and The Lumineers, and countless miles logged in a vegetable oil-fueled van, those young men from New London I once knew are now all grown up, and better than ever.

Quiet Life will perform TONIGHT at The Stone Fox with local singer-songwriter Carey Kotsionis. In a pleasant parallel to their Cups to Go and Captain Tee’s days (only Quiet Life will get that reference), this show will cost you just $5. Things start at 9 p.m. and it’s 18+.

Best described as folk rock, but pulling from elements of Americana, with a hint of classic country, Quiet Life are the real deal. Their latest album, Wild Pack, which was recorded in Portland and employs the help of a plethora of local heavy-hitters, follows 2011’s Big Green. Though they haven’t changed their style dramatically, Quiet Life have broadened and improved over the years, honing their sound and letting the influence of their west coast surroundings creep in.

Hailing from right here in Nashville, singer-songwriter Carey Kotsionis channels an eclectic blend of jazz, blues, and ragtime roots, and fuses them with her own modern pop sensibilities. Think of her as an old school singer-songwriter meets jazz singer with songs that sound fresh and energized for today’s musical climate. She’s a perfect fit to perform with Quiet Life, and an exciting reason to show up early!

Quiet Life and Carey Kotsionis will perform TONIGHT at The Stone Fox. The show is 18+, begins at at 9 p.m., and tickets are available for $5 at the door.