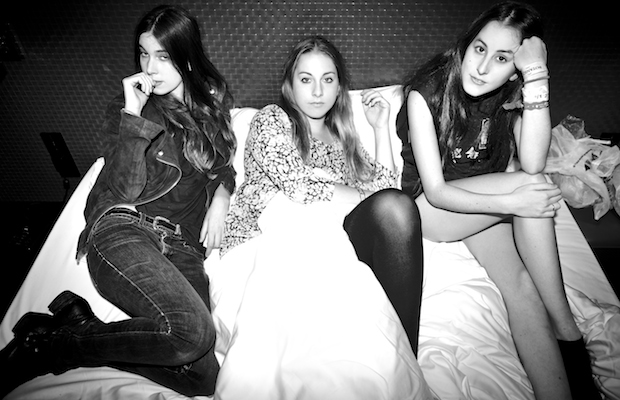 When we first told you about Los Angeles sister act HAIM, they only had one EP and a looming Bonnaroo debut under their belt. That EP, last summer’s Forever, great in its own right, proved only a taste of what HAIM would achieve with their new, debut full-length, Days Are Gone. The product of a lifetime of making music together (HAIM itself was formed all the way back in ’06, but was slow to start due to various other personal and professional commitments), Days Are Gone is one of the strongest indie rock debuts in recent memory, and has propelled HAIM into a new stratosphere of buzz and acclaim. Pulling enthusiastically from ’90s r&b, hip hop, pop, folk, and classic rock, HAIM funnel their unique sound (and other-worldy writing chops) into something that could best be described as “indie pop.” We’ve had the pleasure of catching them twice now on the festival circuit, and can assure you: they live up to the hype.

Though they technically played Nashville back in 2010, supporting The Strokes’ Julian Casablancas, HAIM‘s newly-announced April 27 appearance at Mercy Lounge, part of a comprehensive world tour, marks the group’s first proper Music City headliner, and first show in town since they really discovered their voice. Though it’s months away, this show will almost certainly sell out, so don’t hesitate when tickets go on sale this Friday, Nov. 22, at 10 a.m. It’ll cost you $18, the show is 18+, and support has yet to be announced.

And, if you can’t wait until April to get your HAIM fix, tune into Saturday Night Live this weekend (Nov. 23) to see the ladies’ inaugural appearance as musical guest.