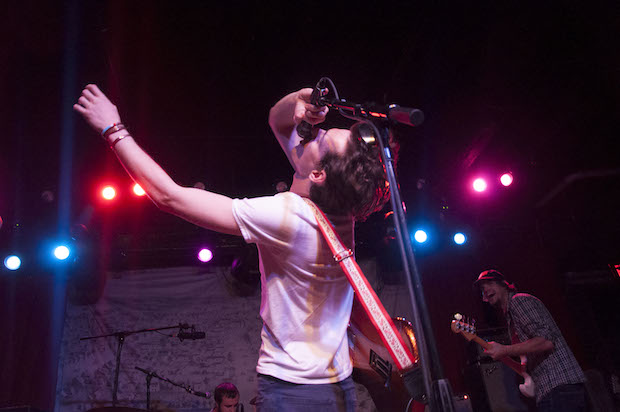 During a weekend with one of the best line-ups (have you been reading TWiN?!!) of the entire fall/winter season  you would be crazy to have missed out on some amazing live music. For starters, Houndmouth, Wheeler Borthers and Scott Carney (of Wax Fang) got it on in front of nearly a full house at Mercy Lounge.  Unfortunately, until each of has our own army of clones, no one can be everywhere at once but fear not Music City faithful! I’m here to fill you in what you missed and be sure to check out our exclusive photos below…

When life gives you lemons you just have to say screw lemonade and get the hell out of the house and out of your own head. A friend of mine has been going through a rough time and was all set to start juicing until I talked her into coming out with me for a show. She knows my music taste is impeccable so it wasn’t a hard sell and we were at the Mercy Lounge bar pounding beers and shots in no time flat. Our troubles would be there tomorrow for us to worry about, when the hang overs wore off.

Watching Scott Carney take the stage I didn’t know what was going to happen. I enjoy his band Wax Fang’s crazy mash-up of folk/indie/psychedelic/experimental/insert-more-sub-genre-to-taste rock but wasn’t sure what he would bring to the table solo. He calmly strummed his effect peddle laced Fender and sang as the crowd filled in. It was a very nice background for the casual conversations going on all around us. Sometimes the chill openers are my favorite. After a few songs, he warned us all not to have unprotected sex and than started the beat on his looper to one of my all-time favorite Talking Heads songs “Psycho Killer”. Well Played Mr. Carney, well played. Covers would become a reoccurring motif.

The Wheeler Brothers came out next and they wasted no time keeping it country with their Texas-flavored jam session. You got the feeling that the crowd was just window dressing. It’s obvious this guys just love to play; whether in front of 5 people or 500. The handsome lead singer bopped around barefoot on a innate oriantal-style rug laid out on stage and got every body else grooving as well. They played their set with little or no funny business in-between songs and closed with a cover as well, Jackson 5’s “One More Chance.”  The awesome rendition and unavoidable sing-along set the bar pretty damn high for the headliners.

Lucky for us all, Houdmouth was up to the task. The quartette from New Albany, Indiana are new kids on the block and touring in support of their debut album From the Hills Below the City which pretty much kicks serious ass, if you dig the first single “On the Road“. They played the album top to bottom (not in order), much to everyone’s enjoyment and even slipped in a couple covers of their own … which, as a huge fan of all music, I LOVED! Imitation is the sincerest from of flattery and I also enjoy knowing who my favorite bands listen to. They did The Bands “I shall Be Released”  and my friend and I both got goosebumps. For the encore they did a John Prine song I was too drunk to remember the name of thanks to Jim Beam. Beforehand, they told a funny anecdote about playing the same song in France and no one knowing who the hell Prine was. Obviously not a problem in Nashville.

They finished up and took their final bows sprouting ear to ear grins. Hard to believe they were probably all born right about the time I was hitting puberty. Impressive indeed. I wasn’t even sure they were legal to drink but despite their age, no one will be able to call them “green” for much longer, especially if they keep rocking it out. Don’t miss your next chance to see them live because it won’t be long before Houndmouth is a house-hold name. Be the first of your friends to claim ‘I saw them before they were big,’ or forever remain a step behind. The choice is yours.