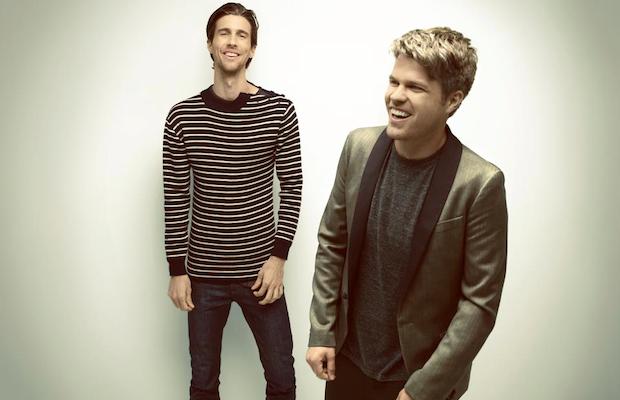 The Journey’s Noise Tour hits Nashville this evening, bringing an eclectic electronic/dance/hip hop-leaning lineup of 3OH!3, The Summer Set, Wallpaper., and New Beat Fund to The Cannery Ballroom. Though many of you are probably at least casually familiar with the headliners, it’s this bill’s opening acts, Wallpaper. and New Beat Fund, that have us the most excited (and warrant a listen, even if you’re not a fan of 3OH!3 or The Summer Set). As far as the details, this is as ALL AGES show (though not exactly a kid friendly one, musical theme-wise), and, as such, it gets cracking early, at 7:30 p.m. Tickets would normally cost you $20, but you’re in luck, your pals at No Country have the line a little discount. Use the code ‘JOURNEYS’ here OR say it at the door to snag your tickets for just $15. For that price, this one’s worth catching, even if only for half of the lineup. Keep reading to find out more!

A few years back, electro/party/pseudo-rap duo 3OH!3 exploded onto the scene with their unlikely hit, “Don’t Trust Me.” What might have been a one-hit wonder actually turned out to have some longevity, spawning collabs with the likes of Katy Perry and Ke$ha and landing the group some respectable chart success. Their sophomore major label release, Streets of Gold, showcased an underrated ability to balance their carefree, crunked up party style with some dance jams of substance, but, unfortunately marked the beginning of a career decline. The group’s latest record, Omens, was wrought with label problems, delays, and poor commercial performance, positioning them in strange state of limbo. Whatever their future holds, however, one fact about 3OH!3 is undeniable: the duo know how to get the party started and put on a hell of a show. When they’re firing at all cylinders (as they are in the video below), they’re one of the most fun acts around.

At one point in time, The Summer Set were a promising (if not all that substantive) pop rock group, existing on the fringes of the pop punk/Warped Tour scene of the late ’00s. They, like many of their peers, were faced with a bit of a dilemma when that scene began to bottom out, producing fewer and fewer crossover success stories like the Fall Out Boys and All Time Lows of years past. Rather than be relegated to the niche, The Summer Set made the conscious choice with their latest record, Legendary, to vie for a piece of the younger-skewing, Disney pop demographic. Their tunes are still fun, catchy, and competent (see below), and The Summer Set’s live show is seasoned and polished, but, still, we can’t help but wonder about the young band that could have been.

We first discovered Wallpaper., the Oakland-based, electro/hip hop vehicle of artist Ricky Reed (who performs with a live band), this summer at Warped Tour, and were blown away. Not only are they the best band on this evening’s bill, but would be well-worth the cost of admission alone. Though the group first gained buzz from fun (but still smart and well-crafted) tunes like this one, they’ve evolved to become a more experimental, avant-garde, genre-bending act, as evidenced on their latest full-length, Ricky Reed Is Real. Think of Reed as a smarter, more artistically adventerous, and more down to party Macklemore, and his sound as a pop meets hip hop auditory amalgamation of what it feels like to be young and looking for fun. Wallpaper.’s range and creativity is even further intensified with their indescribably awesome live show. There is truly no other artist making music quite like this today, and no better band to watch this evening in Nashville.

The second best reason to attend this evening’s show (and one damn good reason to get there early), LA’s New Beat Fun shared a stage with Wallpaper. (as well as Red Bull Records labelmates and Nashville natives Five Knives) this summer at Warped. In case you couldn’t guess, that was the stage to beat. Equal parts indie rock, punk, electronic, and pop, New Beat Fund bring the California cool and scary good songwriting on their criminally underrated debut, ($) Coinz. Lead single “Scare Me” (watch the video below) is one of our favorite tracks of 2013, and, if New Beat Fund are half as good live this evening as they were when we first saw them, they’re going to be setting the bar impossibly high for the rest of tonight’s performers. Show up early, or don’t bother showing up at all.