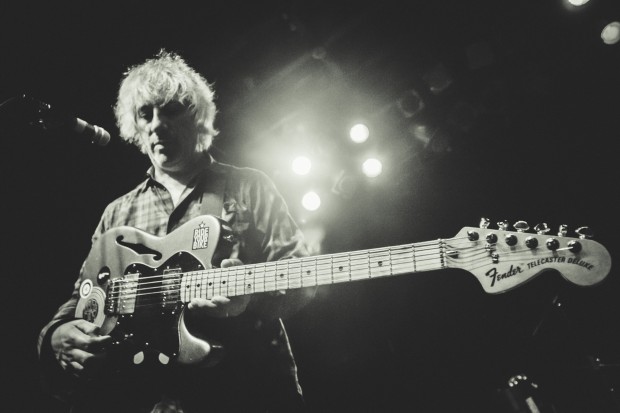 Sometimes the best shows aren’t the ones you’ve been making plans for months in advance but rather the ones you stumble upon by accident or circumstance. I’ve had my mind blown on a random Tuesday too many times to mention but the most recent example may have topped them all. I caught Lee Ranaldo (of Sonic Youth fame) with his new band The Dust and special guest Chris Scruggs quite by accident and it became one of the most tremendous Tuesday to date.

It was a very hum-drum evening. I had a few beers after the day job and was about to work on some writing when I got the call around 7:30. It was Jake, who shoots photos for us but was working a show on behalf of Matador Records. Hoping to get twice the exposure on one show, he needed a writer to tag along so we would run his shots on the blog for ya’ll to enjoy. Having nothing on my agenda of any real importance I told him I’d be there shortly.

I got to Exit/In just in time to catch the beginning of Chris Scruggs. He played a clean looking Fender Telecaster, wore his pressed jeans rolled at the cuff, and had his hair slicked back like a heartthrob from the 1950’s. He completed the look with the Buddy Holly specs but his voice was deeper than the late legend and held a bit more bravado. Scruggs and his band had a sound that was more than just rockabilly schtick. Fast and free. Up-tempo rock ‘n’ roll that could make any sock hop the hippest ticket in town. Check out “It Ain’t Right”  here and hear for yourself.

By the time they’d finished up I was several beers deep, thrilled to be drinking on the house tab. To be honest most of us aren’t getting paid to blog or shoot photos, so open tabs or entry to a show is about as good as it gets ‘on assignment’. Trust me I’m very thankful. At the end of the day there’s only one thing better than ice cold beer and that is free ice cold beer.

Lee Ranaldo is best known as a founding member of hugely influential band Sonic Youth, who are often credited with redefining indie rock music post-punk, bridging the gap between 80’s underground and the wave of grunge hysteria that was the early 90s. Nearly everyone calling themselves Alternative between 1990-1997 lists them as a major influence and for good reason. After a short-lived  and now defunct reunion, Lee struck out on his own and is now playing gigs with his new band, The Dust.

From the start it was obvious that Ranaldo wasn’t your typical git-fiddle player. He had an arsenal of axes just off stage. He switched guitars three times in three songs. There were at least five different weapons in rotation throughout the course of the show, including a couple highly modified Fender Jaguars that he played with a cello bow. He ran the horsehair over electrified strings like a modern day composer, flipping switches and adjusting re-verb on his amps in time. At one point he was waving his Telecaster Deluxe around like a sword and then began rubbing the head of the instrument against the ground, banging his hand against the base and creating cosmic echos of awesomeness.

I’d only been drinking but the music made me feel like I was three doses deep. Was I having a flash-back? The sounds were polished and grudgey at the same time. Ambient just long enough before gaining structure again. The only artist I’ve ever seen come close this crazy-wonderful tech and effect heavy guitar playing is Nels Cline of Wilco … who by no coincidence (I’m sure) appears on one of Lee’s solo records “Between The Times and Tides.” Buy everything you can and find out everything you need to know about Lee Ranaldo here.

Take it from me, it was easily one of the top-5 shows I’ve seen by accident and that’s all-time. If I’m old enough to remember Sonic Youth then you know I’ve stumbled into my fair share of interesting shit by chance. So do what I say! Explore, wander and don’t be a couch potato Monday through Thursday. Get out, get into something, and, by God, go see some live music.

[Hump Day Diversion] Get Your Spooky On