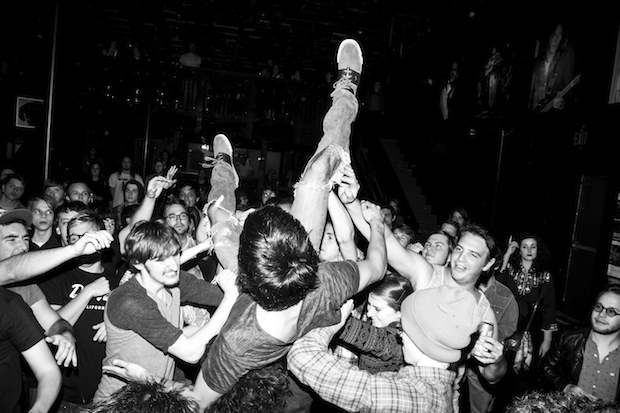 We were trying to lay low last week in preparation for our journey to the Big Apple for CMJ Music Festival, but that wasn’t enough to stop us from heading out to catch a little bit of one of our most anticipated shows of the fall. The return of FIDLAR to Nashville, and (sorry Mercy Lounge) to the proper home, Exit/In, for these rapidly rising kings of punk rock. We were equally excited to check out The Orwells who we unfortunately missed during their spring time journey to Music City for Freakin’ Weekend. Things got started with local faves The Kingston Springs and local upstarts Bully.

You can check out a few words, but more importantly, a lot of really kickass photos from Jake Giles Netter below.

We missed openers Bully and The Kingston Springs, but heard some pretty awesome stuff from their performances. Having seen TKS many times now, it is easy to imagine what that would be like, but it was Bully that captured the attention of our photographer and FIDLAR themselves who glowed about the upstart locals. We’ll be hearing lots more about Bully in the near future.

Our night officially got started with The Orwells, and man did it get weird (typically in a good way). These young hit makers have become mainstays in the more alternative/punk related festivals and the like. It’s for good reason too. While they often have the stage presence of high schoolers, their music transcends and taps into some of the greats in the genre. The quality of their musicianship should only continue to blossom, if their careers don’t get derailed by… well, by being young.

FIDLAR aren’t exactly old men, but unlike The Orwells they have enough stage presence to bring any venue into full frenzy. They took the stage to a fairly kempt crowd. It only took front-man Zac Carper to jump from the stage and start the blender going in front of the stage to get the crowd into it. Within minutes, FIDLAR was smashing through 2 minute long thrash after thrash to the ever-riled up crowd. They chastising the crowd into more crowd surfing and a faster moving blender pit. Worn out and exhausted after several of the more ferocious songs and often ending up on the dirty E/I stage, FIDLAR did exactly what you would expect from someone who’s name means “Fuck It Dog, Life’s A Risk”, they spent every bit of their energy on that performance, and they will do it again for tomorrow night’s show.

No Country Spends 24 Hours At CMJ Festival in New York