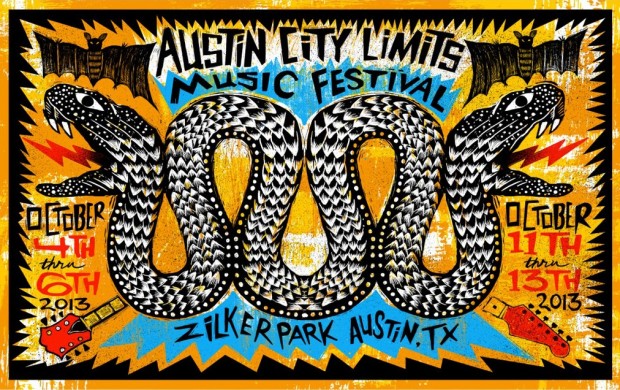 Texas and Tennessee have a special bond. We share historical figures (Sam Houston, Davy Crockett), deep roots in the country genre, and a belt-popping love for BBQ. And while there are some familial squabbles about Nashville and Austin’s titles (“Music City” and “Live Music Capitol of the World”), we generally like each other a lot. So it’s natural that Austin City Limits in the fall follows up summer’s Bonnaroo sweatfest. This year, ACLFest takes place over two weekends. Here’s my roundup of weekend 1.

What’s the most optimistic way to make an entrance to Zilker Park? Jimmy Eat World. As I wound my way through the park outside of the park grounds, “Say hello to good times!” from “Futures” echoes among the trees.

Once I’m fully initiated by Jimmy Eat World’s festival-ready, catalog-spanning set, I catch the thoughtful indie pop veterans from Pinback. After a few head-bobbers, I opt for the amusement park sounds of fun. Points for the juxtaposition of “We Are Young” followed by a cover of “You Can’t Always Get What You Want.”

Grabbing Samsung coffee popsicle #1, it’s time to migrate across the plane with plaid wearing buffaloes to Local Natives. Thankfully, their harmonies didn’t get washed out by the vast space. The late afternoon sun called for a retreat to the Barton Springs Beer Hall to get a light buzz and listen to Vampire Weekend in the distance. While playing a couple older favorites like “Oxford Comma,” the band opted for more dynamic material from their latest release, Modern Vampires of the City.

It’s been a bit since 2005’s single “I Bet You Look Good On The Dance Floor,” so a reunion with the Arctic Monkeys is well overdue. The depth, harmonies, and groove of new songs like “One for the Road” secure them an early “best of festival” spot in my book.

As night falls, Queens of the Stone Age lights up their brand of stoner rock with an x-ray skeleton chomping along to every snare hit. For an abrupt change of page, I transition to Purity Ring. Unfortunately, sound from other stages bleeds into their spacey sounds. Plus I expected more out of the light show. Muse is scheduled to close out Day 1. Matt Bellamy runs onto stage, hammering out famous riffs. You can see the wild adrenaline in his eyes. Then power falls. It takes about 20 minutes before A/V is back up. Momentum killer. Once the stage reanimates, Muse starts back again, except a little flatter before hitting stride at “Supermassive Black Hole”. Kate Hudson is undoubtedly as thrilled as me with Day 1 of Austin City Limits.

Day 2 starts inversely as flat as Jimmy Eat World was triumphant. Despite loving Autre Ne Veut’s 2012 release Anxiety, I can’t enjoy the live performance. Dressed like he just finished a game of 4-on-4, vocalist Arthur Ashin is off-key and relies too heavily on prerecorded beats.

It’s a short walk to grab coffee popsicle #2 and find refuge in HAIM’s set. Doppelgängers aside, only those three sisters can put on such a beastly set. Bassist Este Haim bares her fangs while Alana Haim skips among percussion and keys. Lead vocalist Danielle Haim rocks a star-sprinkled shirt under a leather vest, matching the band’s alternating fierce and dreamy set.

Statisticians report 3/5 of the women at Austin City Limits dress like members of HAIM.

Post-HAIM, it’s too hot to move far. I settle down underneath an LSU flag with a pair of boobs affixed to the top for the lovely sounds of Junip. Clouds finally offer a reprieve from the heat. Without the sun constantly slapping me in the face, I’m able to fully enjoy Portugal the Man. Boosting my energy with coffee popsicle #3, I run to BMI’s stage for Nashville electro-pop heroes Wild Cub. The band’s sounds from last year’s Youth and new tracks rocketed off the stage. I had to resist the urge to tell everyone “Hey, hey, they’re from my town!!!” and show off bad iPhone pictures from an old Mercy Lounge show.

Witchy pop experimentalist Grimes sounds on point. Statisticians recorded 513 people wearing a Grimes jersey. I stick around for 20 minutes before getting the urge to mix the Jameson I snuck in with something more down-to-earth. And then, praise James Brown, I find just that. Los Angeles’ Vintage Trouble strolls onto the stage in sharp grey suits, shakes hands, and gets down to the business of stage-shattering blues-based rock and roll. Ty Taylor radiates soulful confidence, whipping his mic cable around like a lion tamer. Who knew they still made frontmen like this?

Soon, I’m ready for more genre-whiplash and coffee popsicle #4. Passion Pit’s tracks from 2012’s Gossamer and 2010’s Manners mesh nicely. As Michael Angelakos’ falsetto fades away, Kendrick Lamar’s growl takes over the Honda stage. Curious detail: even though Lamar has been beefing with Drake, the Toronto rapper’s verse is left in “Poetic Justice.” Kendrick easily commands one of the most packed shows of the festival. As Mr. Lamar’s set winds down, my festival buddies and I realize the need to finish our whisky, vodka, and nasty shot of pocket tequila. Nashville success story Kings of Leon is the obvious choice to encourage that. New songs from Mechanical Bull hit the spot, particularly “Supersoaker.”

The Cure brings Austin back to the 80’s with hit after hit: Pictures of You, Lovesong, Boys Don’t Cry, and so on. The only difference is Robert Smith’s gray nest of hair, which is just as goth as black.

The beginning of the end of Austin City Limits starts with Portland’s Typhoon. Another lock for a festival favorite, their set ranges from frontman Kyle Morton whispering alone to nine members shouting along simultaneously.

The afternoon turns into a lazy, cloudless blur. MSMR’s green hair whips about. An empty stage’s PA blasts a marching band version of Bohemian Rhapsody. Noah and The Whale keeps up spirits with their lush folk/rock/bluegrass hybrid. And yes, a 5th and final coffee popsicle. Coinciding with a 5 Hour Energy shot, Grouplove injects the grounds with energy again. Hannah Hooper and Christian Zucconi’s manic vocals to bring ACLFest back to life.

Supergroups are lame, but Divine Fits clearly aren’t. The LA based project is made up of members from Wolf Parade, Spoon, and New Bomb Turks. The weekend’s effects of heat, drinking, and odd places to sleep call for a retreat. I catch the end of Toro y Moi and resolve to stay put for French phenoms Phoenix. Phoenix earns another festival favorite with almost too much ease. “Run Run Run” starts out as a sexed-up groove and ended as a balls-out rock anthem. While I’ve heard digs at Thomas Mars’ vocals, he is pitch-perfect through the whole set. From visuals of Champs-Élysées to sharp style and airtight instrumental chops, Phoenix exudes deserved headliner status.

ACLFest keeps Austin weird with the festival closers Atoms for Peace and Lionel Richie. Thom Yorke and company offer looping, spaced-out jam sessions, whereas on the other end of Zilker Park… Lionel Richie’s secret double life as a late-night TV relationship guru is exposed on the stage. Sipping on white wine, he illustrates very detailed day-in-the-life ordeals, such as seeing your lover with another person. At the end of each situation, he asks, “What do you do? CALL LIONEL RICHIE!” Cue hits like “Hello” and “Stuck On You.”

This time next year, you’re sitting in Nashville, wondering if anybody else is out there. You’re feeling lonely, and you need a Texas-sized festival romp. What do you do? Call Austin City Limits.