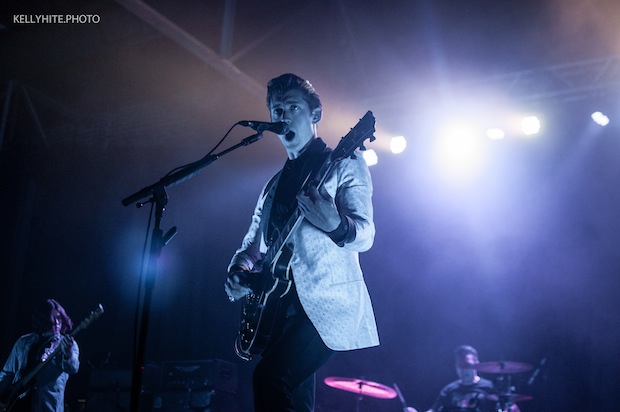 British rockers Arctic Monkeys took over Marathon Music Works on Tuesday night with the chops of some of the greatest British rock legends, and the gaggle of younger women were squealing with every announcement from front man, Alex Turner.  Femme rocking Los Angeles based duo Deap Vally got things started.  After the jump, you can read a few words about the show, and check out some killer photos from local photographer extrodinaire Kelly Hite.

We were really excited to see Deap Vally and their blues driven rock sound that is essentially a female powered Black Keys.  While their songwriting likely doesn’t pack the punch yet to make them the international success of their male counterparts, we were excited to see them at Bonnaroo this year, and made sure that we arrived in time to check out a bit of their set at Marathon.  Apparently, The Black Keys were also concerned that the two gals might be making a run for their current title of blues rock titans, and Patrick Carney was in the crowd probably ready to pull the cord in case things got dubious.  However, that giant performance room can be tricky with acoustics, and we couldn’t seem to find the right spot to feel the true power that these two gals can pack.

Arctic Monkeys are gods.  OK, not literally, but if they can keep putting out records like their last one, we might just start to refer to them in the same company as some of the other British greats that have earned their rock n’ roll knighthood on an international scale.  Touring in support of their newest record, AM, the four piece rockers are back on top after a minor dip in sales in their third and fourth records. Of course, we all knew who the Arctic Monkeys were after their stellar debut Whatever People Say That I Am, That’s What I’m Not and follow-up Favourite Worst Nightmare. I’m not sure what happened during the next two releases Humbug and Suck It And See, but it almost seemed like they were looking to find a new voice.  Conjecture is for naught with the new album though, because it is incredible, and their live show equaled, if not exceeded, that sentiment.  Having seen these guys only once before in a festival setting, the smaller venue was the main draw to get us out on a Tuesday night, and we were right there with the plethora of shrilling girls.  Rolling through hits like “I Bet That You Look Good On The Dance Floor”, “Fluorescent Adolescent”, “Crying Lightning”, and “Don’t Sit Down ‘Cause I Moved Your Chair” from their first four albums, it seemed to be the new hits (“Do I Wanna Know?”, “Why’d You Only Call Me When You’re High” and “R U Mine?”) from AM that really had the crowd going, and that is a good sign from a band that this new release is set to push Arctic Monkeys past their previous peak.   If you aren’t familiar with the new tracks, we have a couple before the picture set below to get you familiarized.

If you were there on Tuesday, you know what an incredible show you saw.  If you weren’t there, I have a feeling your next chance could be in a venue the size of Bridgestone… or perhaps a main stage appearance next summer down on the farm for Roo 2014.  Trust me, where ever it is, you want to be there to see it.

Arctic Monkeys Setlist
Do I Wanna Know?
Brianstorm
Dancing Shoes
Don’t Sit Down ‘Cause I’ve Moved Your Chair
Teddy Picker
Crying Lightning
Snap Out of It
Reckless Serenade
Old Yellow Bricks
Why’d You Only Call Me When You’re High?
Arabella
Pretty Visitors
I Bet You Look Good on the Dancefloor
Cornerstone
I Wanna Be Yours
Fluorescent Adolescent
Knee Socks

Encore:
One for the Road
Do Me a Favour
R U Mine?

Scroll through the gallery below to see some of the brilliant (yeah, I said that in a British accent) photographs from the talented Kelly Hite.