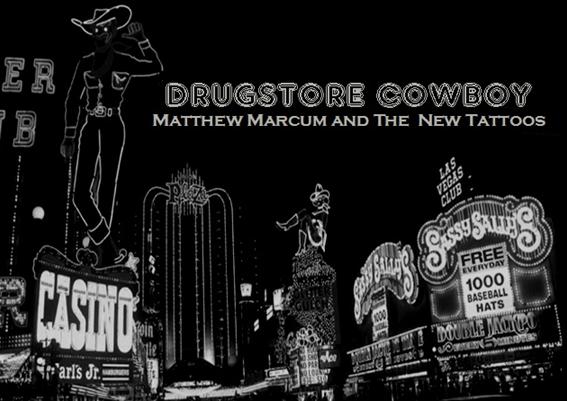 Much like the relentlessly prolific (despite constant threats to retire) Ryan Adams, newly local (from the great state of West Virginia, via Chicago), multitalented performance artist, Matthew Marcum is delighting folks with an end of the summer bonus, two albums at the same time: Drugstore Cowboy and The Reinventionalist.

What makes this dual-drop particularly interesting is that the separate albums seem to represent two distinct faces of this multifaceted performer.

Drugstore Cowboy is described as “an eclectic mix of beatnik soul with a rock and roll swagger” and here we hear songs that would be right at home on the jukebox at your down home bar. It’s a self-described “low-fi Americana fest” full of “hard luck lullabies and blue collar fairy tales.” Fans of John Mellencamp’s similarly low-fi Americana effort, No Better Than This,will find lots to love here. It’s a thoroughly modern take on a classic format that proves one of Marcum’s great strengths is his ability to construct a narrative through a string of strikingly specific details that take the listener to an unmistakable time and place.

“A Year Or Two,” which opens the album, has a decided twang to its tongue and could easily find its way both onto a modern country chart and perfectly placed in a Broadway musical (sung by the forlorn and scorned lover who plans to skip town in hopes of getting over his heartbreak, just before he makes it to the big city and we uptempo to a big dance number that shows the crazy pace of living in the city!) Marcum should absolutely write a musical and this is my formal call for him to get together with Cristina Taddonio (whose songs share a similar storytelling quality) to compose that sucker soon as I can imagine her voicing the lady’s reply under a country moon. Here’s that little ditty right here:

And while Drugstore Cowboy is a thoroughly solid collection of compositions, it may be on the companion recording, The Reinventionalist, where Marcum most brightly shines. Blending an “unconventional catalog that defies genre specifics,” a truly unique voice emerges. The sound narrative structures exist as the hearty backbone to his tracks, but listeners are treated to characters so vibrant, they must be born out of the songwriter’s other life, creating characters for the stage as a playwright, producer, director, and actor.

On The Reinventionalist, Marcum invites listeners “to discover a soulful Tiger Tale, a Pin Up that can not be held down, a mysterious Factory Worker, a self tied Probably Knot, and a Bathtub Mermaid Serenade.” The characters and their trappings are almost Silverstein-esque in their humanity and humour and there are plenty of surprises along the album that make it so much more than your average listening experience. Take “Boxing Lover” below for example, spoken word predominates, the performance artist is at play. While incorporating more avant-garde elements, The Reinventionalist still remains accessible and relatable; it’s a mash up for postmodernists that still need a little structure to their serenades… of mermaids. Whimsy and reality collide to create a construction that defies categorization.

Both of these unique records are available right now for purchase through the online outlet of your choice. So take your pick of Bandcamp, CD Baby, Itunes, whathaveyou and get familiar with one of the most original writers working locally and be sure to catch him every month hosting It’s A Happening at the Boheme Collectif.