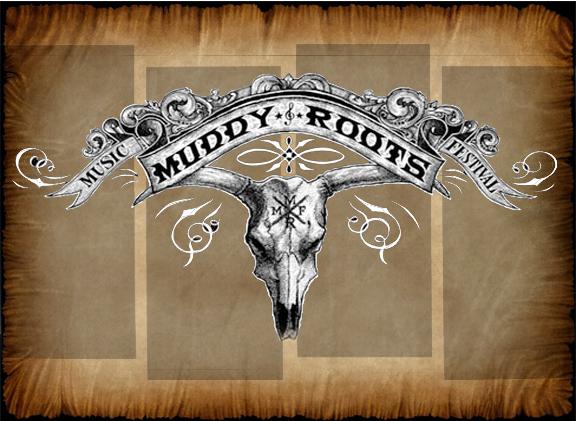 Labor Day weekend was time to pack up the tent and head east to Cookeville for a few nights of camping and music. Several of my friends have been going to the Muddy Roots Music Festival for years, but this was my first pilgrimage. We made camp in a freshly mowed field with rather hilly terrain or tree-lined shady areas. Instead of one massive, continuous camp site, there were pockets of camping areas scattered about the festival and these smaller enclaves made it feel a lot more intimate and less overwhelming than many outdoor festivals. 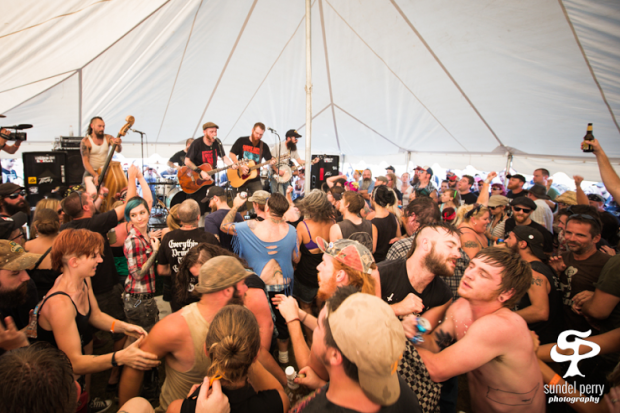 The bands and events were distributed between three stages connected by a causeway lined with vendors and some pretty great food trucks. There was a little something for everyone with variety of performers, an old car show, and burlesque and pin up competitions. While family-friendly would not make the list of first fifty adjectives I would choose to describe the event, there were a number of friendly families there. Crowds were rowdy, but nothing ever felt out of control. The infrastructure was present (frequent trash pickup and port-a-loo cleaning, emergency medical services available when needed, fire fighters willing to fill everyone’s swimming pools) but unobtrusive to the point of bordering on invisible – no metal detectors, no pat downs, no bouncers ensuring crazies don’t infiltrate the stage. Any efforts made to discourage stage crashing were generally spearheaded by the sound guy, who also sought to curtail audience members throwing full beers at the bands on stage. As often as not, his efforts were met by announcements from the band (the target of said beers) exhorting the crowd not to listen to anyone telling them what to do (i.e, not throw beers at them or jump onto stage for bear hugs). I haven’t quite seen anything like it.

After the jump, I run down a few folks that y’all should look into. It was a great music discovery weekend for me as there were only a handful of bands I had seen previously before. Most places I’ve been when I make a mental note to find out the band with the topless banjo player with a bunch of facial tattoos, that’s sufficient detail to narrow it down to the one act I’m looking for, but such descriptors were insufficient to uniquely identify bands at Muddy Roots Music Festival.

LARRY AND HIS FLASK
Larry and His Flask are a high energy, five piece band from Redmond, Oregon that incorporate facets of Folk, Punk, Gypsy Jazz, Bluegrass, Soul, and Brass band music to create their own brand of rock and roll.

DALE WATSON
With a recording career spanning two decades, Watson recently released his new album, Carryin’ On, on his own new label. His hardscrabble honky-tonk earned him induction into the Austin Music Hall of Fame and established him as a leading crusader against the “Nashville Rash” plaguing the country music industry.

CAROLINA STILL
Check out their new album The Color Of Rust.

DASH RIP ROCK
This New Orleans trio is known for their high-octane roots rock. In 2012 Dash Rip Rock was honored to be inducted into the Louisiana Music Hall of Fame. Long celebrated for tight musicianship and high energy live shows, the band has amassed a loyal, diverse following. Often credited with founding the musical genre known as “Country Punk,” Dash has always been a roots-based band inspired by a variety of styles including rock, roots-rock, Americana, rockabilly, country, and punk.

WHITE TRASH BLUES REVIVAL
Joe Bent plays the first ever fully functional skiddely-bo. Of his own design, it was created out of a skateboard, a red stripe bottle, two guitar strings, and a 2×4 for support playing through a broken guitar pick-up and a Marshall half-stack. Ol’ Sausage Paw (OSP) decided to put away his real drum kit and bring out his garbage and bangs the shit out of a cardboard box, a paint tin, a trash can, and a five gallon bucket. Rounding out the group is Ando who stole his mama’s wash bucket and went months without washing his clothes after drilling a hole in the bottom to make his bass.

THE GODDAMN GALLOWS
The Goddamn Gallows came from the heart of America’s Rust Belt, drifed across the states cementomg their sound in Portland, OR and later in Los Angeles, CA. Building upon their original sound of twanged-out, punk rock gutterbilly they began picked up stray musicians to addto their sound: washboard, accordion, mandolin and banjo. They have been described as “hobocore”, “gypsy-punk” and “americana-punk.”

THE CALAMITY CUBES!
The Calamity Cubes! are a Kansas thrashicana band featuring guitar, banjo, and upright bass. They sing about love, drinking and murder.

HILLBILLY CASINO
These guys are great and have a standing Friday gig at Layla’s on Broadway when they aren’t on the road. Well worth checking out if you like juiced up rockabilly. They are talented musicians and performers who put on an incredibly high energy show.

L.C. Ulmer
At 79 years young, L.C. brings boogie music from South Mississippi. He drove a truck for the last 40 years out of Chicago and moved back to his home state of Mississippi 2004. L.C. has driven railroad spikes, picked cotton, had a one man band in Joliet, Illinois, worked as a janitor, a yardman, and a shoeshiner to name a few.